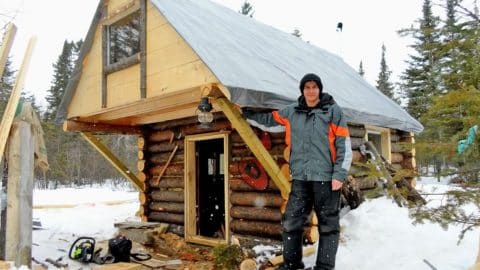 A solitary log cabin in the woods sounds like a dream home to many people but these simple structures actually come with a hefty price tag that surprises most people. However, one young man was able to build his own tiny cabin with just $500 and perhaps the best part is that he filmed the entire thing so you can do it too!

This DIY log home was built up in the northern woods of Canada on private property. Because the house is such a small size, no permits were required, thus keeping the building costs low. He was able to recruit friends and members of his youth group to help build the cabin over the course of eight months.

The builder wrote in the caption of his video,

“Although I had a lot of people who helped on various occasions, I worked alone most of the time, often in temperatures of -30, with only a chainsaw, an axe, and my arms.”

As per the video description, most of  the money went into the lumber that was used to construct the roof. The cabin measures 10’x10′, while the roof section is 11’x16.’ Constructed from 52 logs, it only cost $15 worth of gas, and $30 worth of oil to build the entire cabin with a chainsaw.

Check out the video of the build below.