Man Built A Guitar Out Of His Dead Uncle’s Skeleton 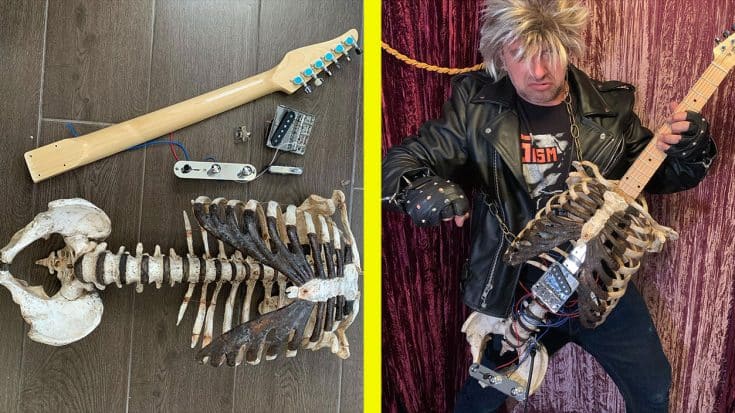 A heavy metal guitar player going by the name of Prince Midnight has completely redefined the art of repurposing something.  Prince Midnight — whose real name is Yaago Anax took his dead uncle’s skeleton and transformed it into a fully-functioning guitar.

Anax made his “Skelecaster” using both the remains of a leftover Fender Telecaster and the bones of his departed Uncle Filip, who introduced him to the rock genre back in the 1990s.

According to the HuffPost, Filip died in a motorcycle accident in Greece in 1996 at the age of 28, and his skeleton was donated to a local college.

“After 20 years, he ended up in a cemetery my family had to pay rent on. Like, literally in a wooden box. It’s a big problem in Greece because the Orthodox religion doesn’t want people cremated,” Anax explained.

Anax had his uncle’s remains shipped to his home in Tampa, Florida where he decided the best way to honor Filip, would be to turn him into a guitar.

Anax admitted that his mom had a problem with the decided use of  Filip’s bones,

“At first, she said it was sacrilegious and the work of the devil ― you know how moms are…But I asked her, ‘Uncle Filip was the biggest metal head of anybody. Where would he rather be? In the ground or shredding?’ She said, ‘shredding.’”

Anax is prohibited by law to sell the guitar but he appears to be enjoying it himself just fine.

Watch him shred on Uncle Filip in the video below.