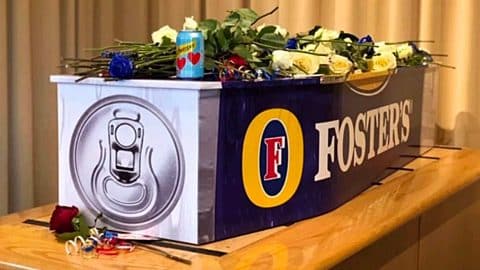 52-year-old Perry Cardy was a man who worked all week and would spend his evenings at his favorite pub every Friday and Saturday. When he passed away, his friends and family decided to honor him with a coffin that looks just like his favorite can of beer, Foster’s.

Perry and a guy got into a scuffle outside his favorite pub and the guy caused serious injury to his head on Friday, April 19th, 2019. Perry ended up dying that Sunday and the guy is now in police custody probably going to prison for a very long time.

“He was a hard-working man who worked Monday to Friday, so he would go to the pub on a Friday and Saturday night.”

Mr. Cardy’s sister, Mandy Hunter set the funeral up how he would have wanted it. Not a sad funeral but an upbeat and happy one, just like Perry would have liked. Mandy spoke to the funeral directors about customizing the coffin and they were down to do it.

“I spoke to the funeral directors and asked if we could have the coffin wrapped, like you can do with cars. He said it was possible and gave us a quote. While a traditional coffin would be around £400, we paid £700 to have the Foster’s can printed on it.”

Perry’s funeral sure was different than most and she was “overwhelmed with the amount of people who turned up.”