By Jennifer Pernicano on December 19, 2019
Advertisement 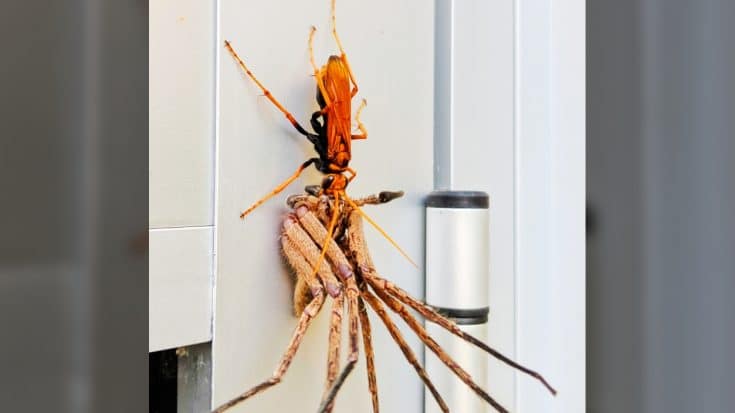 Someone in Bronte, Sydney took this terrifying photo and we don’t know when we will ever be okay.

Tarantula hawks – sometimes known as spider wasps – are among the largest wasps, measuring up to 2 inches long. The more impressive thing is that the animal they hunt is 2-3 sizes bigger than them – or larger!

As you may have gathered from their name, these wasps prey on tarantulas. The Tarantula hawk’s stinger is known to be the most painful of all insects. If one of these insects stings a human, the intense pain will probably only last about five minutes, but it is apparently “immediate, excruciating” and is “unrelenting pain that simply shuts down one’s ability to do anything, except scream. Mental discipline simply does not work in these situations.”

Despite being being super painful, and possibly triggering an allergic reaction, the sting isn’t dangerous or poisonous and usually doesn’t require medical attention.

Tarantula hawk wasp’s sting is so painful (yet non-deadly) that experienced professionals will suggest you to just lie down and scream if stung because most people lose verbal and physical coordination afterward. pic.twitter.com/dA5by0uKt7

Male tarantula hawks do not hunt, they feed on flowers and trees. Female tarantula hawks are the ones who use their powerful sting to paralyze their prey and drag it to a prepared burrow for her young to eat. She usually gives the larger meals to her female offspring, because the male wasps don’t have to get as big since they don’t hunt.

This British man – who is living in Bronte, Sydney, Australia – got home from work and saw a tarantula hawk carrying away a huntsman spider, which has a leg span alone of 9.8-11.8 inches. He posted the photo on reddit, where it has blown up.

Spiders are known to run away from tarantula hawks, so it’s quite interesting that a spider of this speed and experience in hunting would get trapped by it! Check out the harrowing sight the man came home to below.

got home from work to find this Tarantula Hawk wasp carting off a huntsman spider (Sydney, Australia) #pics pic.twitter.com/n11FdDHzo2