By Miranda Raye on September 9, 2019
Advertisement 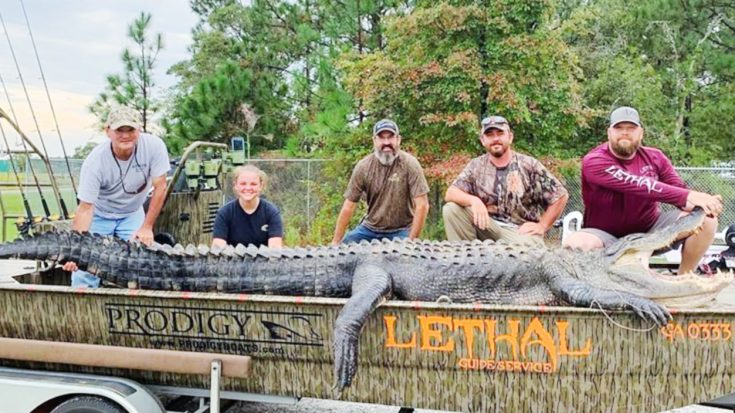 Alligator hunting season kicked off in September, and folks nabbed some monster gators.

Ever since the 2019 gator hunting season started, there have been multiple reports of people catching gators weighing hundreds of pounds. For example, mere minutes after the season opened in Mississippi, hunters snagged a gator that was 13 feet, six inches long.

Its measurements indicated that it could have been near the state record for the largest male gator caught in public waters.

WOW! Soon after alligator season opened in Mississippi, two hunters caught a giant that could break a state record. https://t.co/TgNOjS6vXC

That’s just one example of a monster gator that has been caught since the start of the hunting season. And here’s another…

According to a September 9th report by ABC 7 News, a Georgia man caught a massive gator the previous week. It’s so big, it is believed to be the largest gator ever caught in the state.

So how much does this potentially record-breaking gator weigh? Well, it tips the scale at 700lbs, and measures over 14 feet in length.

WOW! ?The 700-pound alligator is believed to be the largest ever caught in the state. https://t.co/l1DtykaYaR

ABC 7 News‘ report states that it took a crew of five people five hours to bring in the giant gator.

Hunters in Georgia can only claim one gator per hunting season. So this man can consider himself lucky that the one gator he caught was a big one!

You can learn more about the man’s massive gator catch by tuning in to the video below.