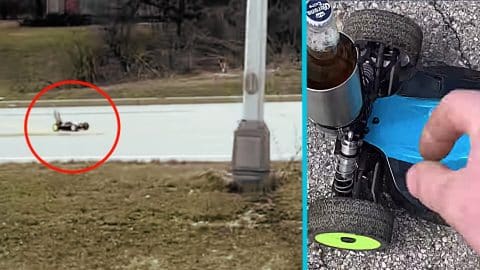 Eric Trzcinski lives in Richfield, Wisconsin. Governor Tony Evers declared on Tuesday (March 24th, 2020) that everyone must stay home to help prevent the spreading of coronavirus.

Governor Evers said in a public announcement, “Issuing a safer at home order isn’t something I thought we’d have to do. We are all in this together and we need to stop the spread of COVID-19.”

Eric wanted to obey the governor’s orders but also had a neighbor named Trevor Reinke who lived across the street from him who he wanted to surprise with a gift. Eric called Trevor over the phone and told him to start recording when his garage door opened. Trevor did exactly that.

He opened his front door and stood on his porch until he saw Eric’s garage door open and then he started recording. Cars on the road were speeding by at the start of the video and once the door was fully open he saw Eric’s RC car zoom out to the end of the driveway. It made a cautious slow down before crossing the road.

Once it appeared no cars were coming he drove the RC full speed on the road all the way to Trevor’s house and into his driveway. As the RC got closer you could see there was a Corona beer safely in a cup holder attached to the toy car.

Busting out with laugher, Trevor said, “Thank you neighbor!”

Trevor posted the video on Saturday, March 21st, 2020, captioning it with “Drinking with the neighbor [while] maintaining a safe distance.” Both the guys were extremely surprised to see that the video went super viral getting over 6 million views by Wednesday.

Drinking with the neighbor well maintaining a safe distance.