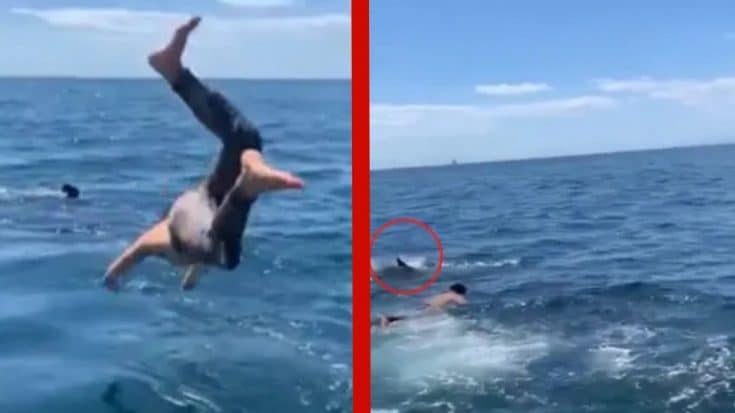 Off the coast of Encinitas, California a man was filmed jumping into the water with a shark thinking it was a “harmless basking shark.” It was not a harmless shark, it was a great white shark.

The video was first shared on Reddit on September 27th, 2020, and has been blowing up with views ever since. The guys in the boat were not far from the beach when they spotted the shark and decided to film it.

"that’s not a basking shark Dude!" from TheOutlawsAssociation

A guy on the boat identified as Ryder said he thought it was a harmless basking shark when they spotted it. He dove into the ocean straight towards the shark and got so close he touched it. Realizing it was a predatorial great white, he popped his head up out the water and said, “That was a bad idea.”

The shark circled around him and the boat as Ryder swam back. His friend on the boat said, “Get on the boat! Ryder! Dude that’s a… that’s not a basking shark dude.”

The footage cuts off right when it appeared Ryder gets back on the boat and it appeared he made it back safe. It’s a pretty crazy video. Take a look at it yourself below.