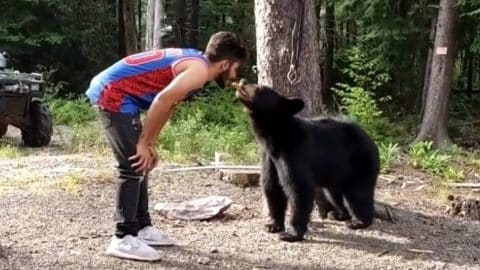 Dakota Datz is a man with no fear when it comes to sharing a meal with his wild friend, the black bear.

In several videos he shared, you can see him laughing and enjoying his time with the bear after sharing a few cookies with it by his mouth. The bear begs him for more cookies, eagerly ready to eat another.

This is not the first time someone has fed a bear mouth-to-mouth. Hollywood star Jason Momoa, shared a video on Instagram of behind-the-scenes footage explaining what he had to do before being able to film a scene with a grizzly bear. Jason spent a lot of his time with the bear, learned how to get closer to him, entertain him, but also practiced feeding it a cookie from his mouth.

“I had to train to fight a grizzly bear,” Momoa said, according to Mens Health. “You’re going to watch it. It was a Kodiak bear. It stood nine-foot tall… You have to get it slowly close to you, and be able to interact with it.”

The things we do for our ART. SEE. Is out. Please watch on Apple TV+. The bear needs to know your scent. So here’s my cookie kisses big guy. Love you tag. Aloha Baba Voss

You should never feed wild animals, and this especially goes for bears. If you encounter a bear, here are some steps that can be taken according to REI:

Watch Dakota feed the beer in the video below.

Man feeds wild bear out of his mouth https://t.co/XXCQOcrEH1 pic.twitter.com/viuYiDVP6T