By Manly Bryant on August 9, 2019
Advertisement 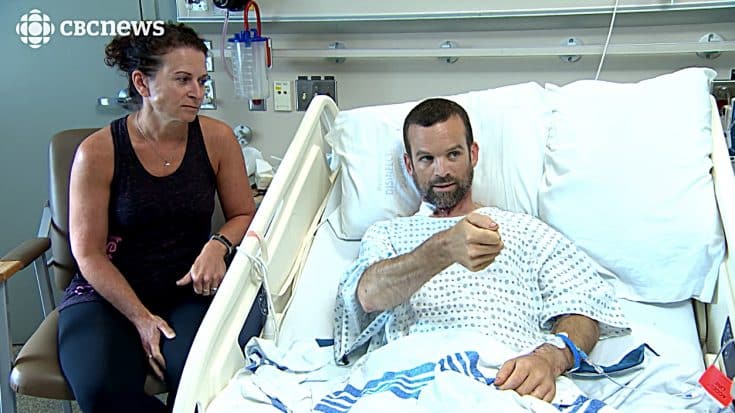 Colin Fowler was riding his bike in the backcountry trails of British Columbia when he rolled up on a missive grizzly bear walking in the middle of the biking path. As he slowed down the bike his heart pounded wondering what he should do about the situation he just found himself in.

“I wasn’t sure what to do about the situation so I just stood there and let the grizzly keep walking up towards me.”

The bear is 100 feet away and all Colin has is his bike, a walking stick and a pocket knife. The bear doesn’t growl or run but simply walks right up to him and gets so close that Colin holds his walking stick up until the bear runs his forehead into it.

Tug-A-War With The Grizzly Bear

At this moment the bear grabs the stick and they play tug-a-war with it for a few seconds until the bear wins and pushes Colin to the groud. Helplessly he lays there as the bear starts chewing on his left thigh. Colins tries to pull his lips back and the bear bites his hand.

Then the bear starts gnawing on his right thigh and Colin tries to poke its eyes out with his thumbs but the bear shakes him off. Colins lays still trying to play dead an attempts to trick the bear into leaving him alone but that doesn’t work either.

Finally he reaches in his pocket and grabs his 2 inch pocket knife as the bear continues to chew on his legs and stabs the bear in the neck. The bear immediately stops, backs off and walks away. Bleeding out, Colin rips his shirt and wraps it around his legs.

“Somehow, I don’t know how I did it. I used both hands to pull underneath the bear to get to that knife, and I grabbed the knife … and stabbed the bear in his neck. It let go of me immediately. It was bleeding quite badly, I wasn’t really sure if it was dying faster than I was.”

He Bikes 4 Miles To Camping Lodge

Somehow he gets on his bike and peddles 4 miles until he rolls up on a cabin where people are and they see him right before he passes out. Fortunately for Colin they had first aid kits on them and were able to stop the bleeding and get him to a hospital.

“They just went to work, doing their best to save my life,” Colin said. “They’re truly the heroes of the story because there’s no way I would have made it without [them].”