By Manly Bryant on July 1, 2022
Advertisement 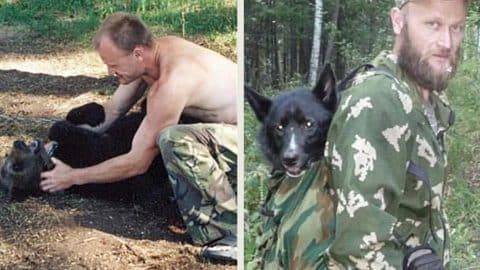 A 41-year-old hunter in Russia named Sergey Grigoriyev rescued a bear in the forest when it was a helpless cub and raised it, naming it Grumbler, only to have it grow up and kill both him and his dog.

Police said the man’s relatives reported him missing after not being able to get in contact with him for a few days and showed up to his house to look for him. As they were searching, they found Grumbler on the loose, running around the property and behaving aggressively.

“We called him but he did not answer,” Daily Mail reported the relatives saying.

Senior detective Alexey Petrov who showed up at the location to investigate said that the cage the bear was normally found in was wide open and he believes it somehow escaped and attacked its owner.

According to Daily Mail, detective Alexey said, “When his relatives came, they saw a bear wandering around the plot. There was a dog with them. It attacked the bear, giving the people the opportunity to escape in the car.”

Police said the relative’s dog was killed in the process of trying to save the family while they ran back to the car and called 911.

When police showed up at Sergey’s home, authorities shot and killed the bear on-site after spotting it running around Sergey’s home.

According to Daily Mail, a police statement said, “Officers used their service weapons to kill the dangerous animal. As a result of the measures taken, the bear does not pose a threat to citizens’ lives and health any longer.”

A neighbor told police that they had shared a tea with Sergey but didn’t see him afterward and that was the last time anyone heard from him until he was found dead.

Police said all they found was Sergey’s “skeletal remains” and that he was eaten to the bone by the raging brown bear he kept as a pet in a cage. The bear also killed and ate one of Sergey’s three dogs on the property in addition to the relative’s dog.

The relatives told the police that the bear had previously attacked its owner before and many of his friends and family told him to get rid of it but he ignored the advice.

It’s a tragic story and one we can all learn from–leave the wild animals where they’re supposed to be…in the wild!

See Footage Taken Of The Bear & It’s Owner Below