Man Jumps Into Pond To Rescue Puppy From Alligator 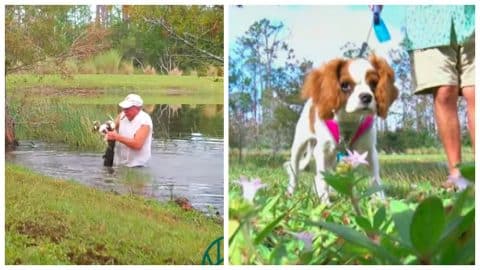 “We were just out walking by the pond…I never thought an alligator could be that fast,” Florida retiree Richard Wilbanks told CNN after a small gator jumped out of a pond and grabbed his 3-month old puppy, Gunner.

But, the gator was no match for the determined 74-year-old. Wilbanks jumped into the pond, went underwater and emerged with the alligator in hand. The man pried the gator’s jaws open to free the Cavalier King Charles Spaniel, and the entire encounter was caught on a surveillance camera mounted to a nearby tree.

Wilbanks said that holding the alligator wasn’t a challenge, but prying its jaws open was. Thankfully, Gunner survived the attack with one puncture wound on his belly, and Wilbanks received a tetanus shot because his hands had been “chewed up” by the gator.

The incident took place in October, but was only recently revealed when the Florida Wildlife Federation retrieved the memory card from their camera. Wilbanks participates in a program that allows the federation to place cameras on his land to document animal activity.

Wilbanks doesn’t want the alligator removed from the pond, but he is keeping his pup away from the pond’s edge. Watch the dramatic rescue unfold in the video below.