Man Jumps Into Pool With 9-Foot Alligator, Captures It Bare-Handed In Florida 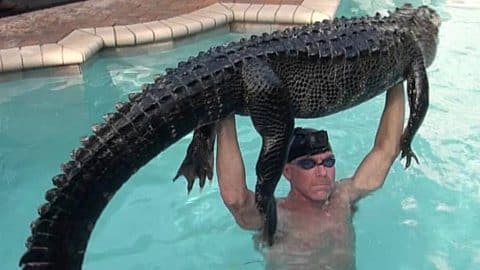 Paul Bedard, a wildlife trapper in Parkland, Florida got a call about a 9-foot alligator that had crawled into a woman’s backyard pool, so he drove over to handle the situation.

Paul has his own company called GatorBoys Alligator Rescue and he’s usually one of the trappers in the area who gets these types of calls. He mentioned on his Instagram page where he shows off the gators he captures that he was very excited when he got this call.

“I was kind of looking forward to this when I got the call. These are actually fun because the gator can’t go anywhere and the water’s almost always crystal clear. So all I have to do is jump in the water play around with him until he’s tired,” Paul wrote on Instagram.

Here’s What Happened When The Trapper Arrived

When he gets to the lady’s house he jumps straight into the pool with the gator. Yep, most people might think that’s kind of crazy but for Paul, this is just a normal day on the job.

He tires the alligator out before pulling it out of the water because he says if he doesn’t then it will hurt itself. It can easily chip a tooth on the concrete trying to bite him or bust itself up spinning around doing death rolls.

“I didn’t want to pull him out of the water until he was tired, because he’ll usually go into a death roll and smash himself up on the concrete or, if he’s not taped, bite the concrete or something so it’s always better to make him expend that energy in the water where he’s not going to get banged up” Paul wrote on Instagram.

After the alligator tires out then Paul grabs it by the head and wraps the tape around its mouth. He then pulls it out of the water and puts it in the back of his truck and releases it. The lady was very happy to have it gone and nobody was hurt in the process.