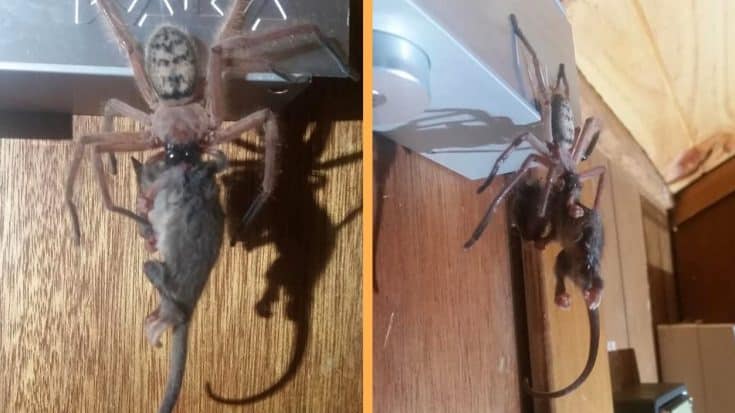 Justine Latton posted a couple of photos in a Facebook group called Tasmanian Insects and Spiders, of a massive spider hanging from the ceiling eating a possum.

According to the post, Justine said her husband took the pictures at an Mount Field lodge, in Bethlehem, New Hampshire. We’re not sure if they were on a camping trip or if he worked there when he took the pictures but what we know for sure is these pictures are stunning.

It’s rare to hear about a spider eating a possum, much less getting it captured on camera. The spider in the picture is a huntsman spider which is known for its impressive speed when it hunts. The spider can grow an intimidating leg span of up to 11.8 inches long.

The possum being eaten is a pygmy possum which is known to only weight up to 1.76 ounces and grows up to 4.7 inches. They eat at night and their diet consists of fruit, seeds, nectar, and pollen. They are excellent climbers due to their long prehensile tail.

We imagine the pygmy possum just happened to be climbing around the wrong lodge when this spider decided to make it, its meal. The spider is definitely big enough to take the possum out so it’s possible the possum was alive when it encountered the spider.

However, the true story behind this battle of the beast remains a mystery. We can only imagine how it all got started but these pictures definitely tell us how it was finished.