Man Picks Possum Up & It Bites Him On His Face 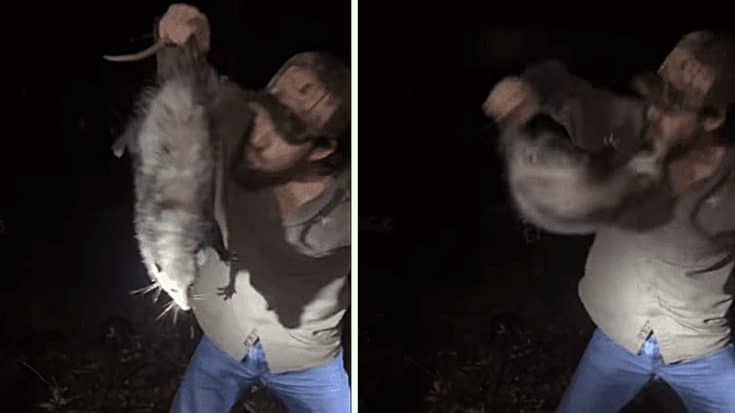 In a wild and crazy video making its rounds on the internet, a country man named Robbie is shown capturing a wild possum and in a surprise, it bites him on the face!

Another man filmed while others stood around watching the video showed Robbie pulling the possum up out of a burrow in the ground and lifting it up into the air for the camera to see.

“There’s Earl, Earl! What you doing baby boy,” the man filming the video said before Robbie puckered up his lips to give the possom a kiss on its side.

The pissed-off possum was not too happy about being pulled out of his home and, within a flash, leans up and bites Robbie on the face right as he was about to kiss it.

The painful bite to the face causes Robbie to pull back and release his grip on the animal and the possum falls to the ground and runs off into the night.

Children and other bystanders in the background can be laughing as Robbie screams in pain. The cameraman tries to chase down the possum, which makes its way to a boat, according to one of the people who believe they spotted it.

Watch The Hilarious Video Below