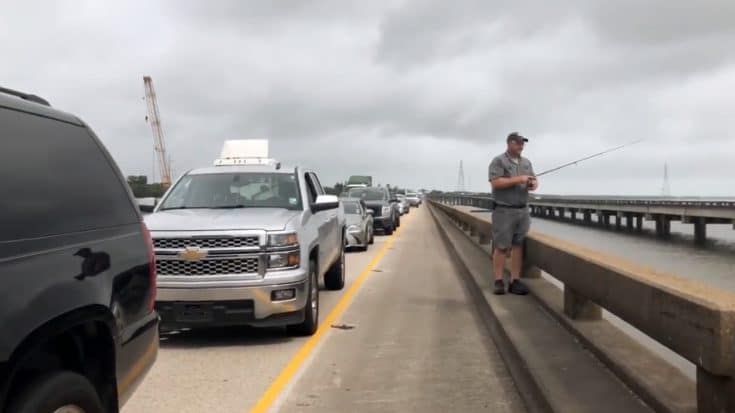 A video of a fisherman in New Orleans has recently surfaced and it shows the pure definition of preparation meets opportunity, as well as, turning a bad situation into a good one.

According to FOX, “A wreck involving multiple 18-wheelers shut down the Bonne Carre Spillway for five hours Tuesday.”

I-10 East of the Bonnet Carre Spillway is closed due to accident at MM 214. Use Airline. Commuters are stuck in a two mile backup. pic.twitter.com/YPdamSanus

The wreck was just before 9:30am and happened on I-10 Eastbound near mile marker 214, the Department of Transportation Development said.

Apparently, two 18-wheelers were involved in a collision that ended with 50-60 gallons of diesel fuel being spilled out onto the bridge’s highway. The crash blocked commuters and caused a two-mile backup that lead to many people missing work, flights, and other important meetings.

“We’ve been sitting here for more than 2 hours,” Kristan, a lady stuck in the traffic told FOX. “10-year-old missed her flight to Disney, two-year-old getting restless…please please hurry!”

Fortunately, no injuries were reported and the lanes finally opened back up at 2:30pm, but during the traffic jam, there was one man who took this five-hour delay and made the best out of it.

The below video shows a fisherman stuck in traffic on the bridge but is standing outside of his truck with his fishing pole in hand.

The man casts his line over the bridge into the water below trying his luck to hopefully get a fish to take his bait as he waits for the authorities to open the lanes again.

Check The Footage Out Below Of The Fisherman

What do you do when you are stuck in stand-still traffic over the Spillway??

We hope he catches dinner! pic.twitter.com/cOV6FilNu8