Man Survives 20 Days In Remote Alaska After Cabin Burns Down, Killing His Dog 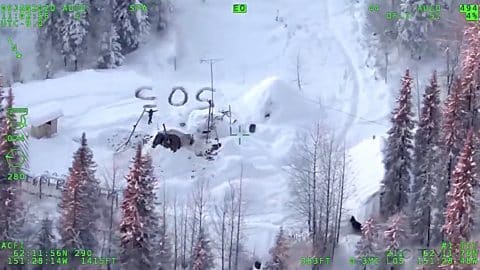 Tyson Steele, a 30-year-old man was all alone with his dog living 20 miles outside the tiny community of Skwentna, Alaska when his home caught on fire and burned to the ground.

For the next 20 days, Tyson had to survive the harsh 15 below freezing temperatures until his friends notified the police and they sent a rescue helicopter to find him. When they flew over to his last known location they found Tyson standing outside, waving his hands in the air and noticed a big “SOS” sign he made in the snow.

SOS is an international code signal of extreme distress and Tyson was definitely struggling. All his survival gear and food was in the cabin that burnt down and he wasn’t able to gather much before the fire consumed everything.

Tyson says he remembers putting a piece of cardboard into his stove in a rush to warm the cabin and then fell asleep. Moments later he woke up to the roof of his home on fire. Quickly in his pajamas, a t-shirt, and no socks he threw on his boots and went outside.

That’s when he noticed his plastic tarp roof going up in flames. He rushed back into the cabin and told his dog to go outside while he gathered up as much supplies as he could before the flames took them.

He was able to get some canned food, beans, pineapple, and peanut butter before being forced out by the flames. Once he got outside that’s when his heart sank to its lowest because he didn’t see his chocolate lab. He then heard the poor pup howling and screaming from inside the home. At this point, there was nothing he could do about it though.

“I was hysterical … I have no words for what sorrow; it was just, just a scream,” Tyson told the rescue team. “Just a visceral — not angry, not sad, just like, that’s all I could express — just scream.”

Unfortunately, the dog didn’t make it and Tyson didn’t have time to mourn because he had to immediately develop a survival strategy plan. He had enough food to last for a month if he consumed 2 cans of food per day.

So he built a makeshift tent around his stove and planned to stay there and wait for help to come. If no one came for him by day 35, then he’d leave on foot. Fortunately, Tyson was rescued 20 days later by Pilot Cliff Gilliland and Tactical Flight Officer Trooper Zac Johnson.

They flew him out of the remote location and got him a hot shower and a McDonald’s Combo Meal No. 2. Tyson was grateful for the rescue and decided to go home to his family in Salt Lake City. However, he says he plans to return to his Alsakan home and rebuild, this time though he’s building two cabins in case one burns down again.

Alaskan News Report In The Video Below