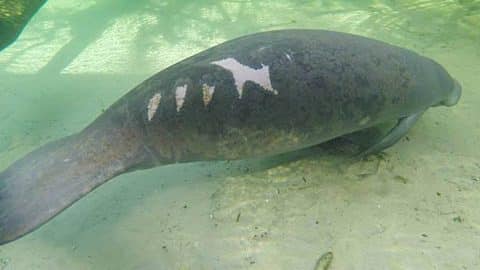 Manatees (aka sea cows) are some of the most beautiful aquatic herbivore marine mammals to witness gracefully swimming, and to one lucky woman in Florida, she found one swimming in her backyard after a flood.

Hurricane Dorian Brought In The Tide

The story hit the internet hard after Hurricane Dorian brought in a high tide to many Palm City, Florida properties. The lady who filmed the majestic creature, Corrine Hogan, heard a splashing noise not far from her back door and when she went outside to investigate she saw it feasting on her grass submerged in water.

“First, I thought it was an alligator,” Corrine said. “Then I looked out the window and saw it was a manatee. I was shocked.”

Good news is after the water lowers back down she won’t have to mow the grass. What’s even cooler is she posted the video to her personal Facebook and the video went viral.

“The tide is so high we actually have a manatee swimming in our backyard right now,” Corrine says off camera. “Wow, she’s a big girl!” (The gender is unclear.)

She’s Happy It Mowed Her Grass

The manatee fed on her grass for a least half an hour before it swam back to the St. Lucie River. Corrine said she just let her munch away as she probably thought to herself “Good, you just mowed my grass.”

Watch the video below and see what she recorded.