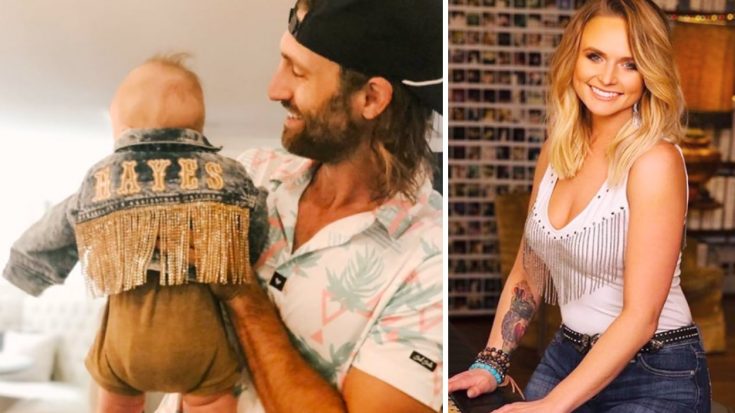 On March 23, Maren Morris and Ryan Hurd welcomed their first child. Maren gave birth to a baby boy, and they named him Hayes Andrew Hurd.

Maren introduced her son with a series of photos on social media, captioning them, “Hayes Andrew Hurd. 3/23/20. Love of our lives.”

In June, Maren received a batch of baby gifts from Carrie Underwood.

Carrie sent Hayes a blue blanket with elephants on it. His name was embroidered on the blanket as well, giving it a personal touch.

He also received a plush elephant from Carrie to match his new blanket. And she made sure to include a gift for Maren as well…some wine!

“Thanks @carrieunderwood for these sweet baby gifts for Hayes (and the wine),” Maren wrote on her Instagram Story next to a picture of Carrie’s gifts.

Carrie isn’t the only one who wants to shower baby Hayes with love. Now four-month-old Hayes just received a gift from Miranda Lambert, and it allows him to “twin” with his mama!

Maren took to her Instagram Story to showcase a pair of mommy-and-me denim jackets that Miranda sent her. Maren’s darker jacket has silver, glittery fringe and her name is printed on the back in silver as well.

As for Hayes, his tiny, lighter jacket has gold fringe and his name is print on the back in gold.

“Oh my god. Okay. @mirandalambert you give the best gifts,” Maren wrote next to a picture of the jackets.

Maren also posted a photo of Hayes wearing his new jacket while being held by Ryan. She thanked Miranda in the post, writing, “Blue jean baby. Thank you @mirandalambert for this sparkly number.”

See how adorable Hayes looks in his denim jacket by checking out the picture below.

Blue jean baby. Thank you @mirandalambert for this sparkly number. ✨✨✨

How cute is baby Hayes in his new jacket? Miranda truly does give the best gifts!

Now we can’t wait to see a picture of Maren and Hayes wearing their matching jackets together!