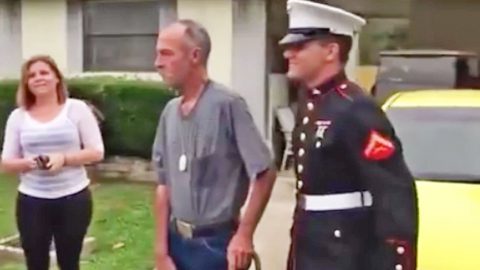 At any given moment in communities across America, brave men and women of the United States military can be found reuniting with their loved ones – many who are coming home after months or even years away.

Every Reunion Is Emotional

The reunions are filled with emotions, tears of joy, heart-wrenching hugs and immense pride for serving our great country.

Whether they take place between a pet desperately unaware of why his master never came home or two family members, the moment they are together once again is always one packed with endless happiness and love.

In one especially-moving reunion, an active duty Marine, Christian Anderson, came back home to surprise his grandfather, Jeffrey B Anderson Sr. – a retired Marine.

The moment was a blessing for both of them and a stunning surprise for Mr. Anderson as he wasn’t expecting a treat like this for his birthday. The younger Anderson had been away for nearly two years before coming back to see his beloved grandpa.

Donning his dress blues, the young Marine sneaked up behind his grandfather after family members had lured him outside with the promise of an unforgettable birthday gift. As Mr. Anderson looked straight ahead, his grandson approached from behind and came up to stand beside him.

After inching his eyes to his side to catch a glimpse of what’s in his periphery, he realizes his grandson isn’t just a figment of his imagination and the two heroes embrace one another in an emotional and tear-filled moment that neither will ever forget.

Watch this beautiful reunion between them below!