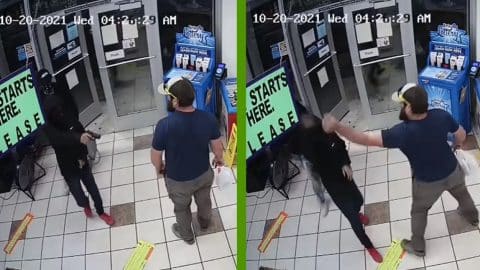 According to the Yuma County Sheriff’s Office in Arizona, a U.S. Marine Corps veteran saved the life of a gas station clerk after a robber pointed a gun at the employee.

“The Marine Corps taught me not to [mess] around,” the marine told the Yuma County Sheriff’s Office.

The sheriff’s office said they obtained security footage from the Chevron gas station showing exactly what went down on Wednesday, October 20, 2021, at approximately 4:30am.

The marine can be seen finishing a purchase at the counter when the gunman and two other young males walked into the store.

The gunman pointed his weapon at the cashier as soon as he stepped foot inside the store and one of his buddies walked in behind him while the other one held the door to the store open.

The marine’s training instantly kicked in.

He calmly watched the gunman as he began to walk past him and move towards the cashier. The moment the gunman got directly beside the marine, he quickly grabbed for the gun and began to wrestle the criminal to the ground.

One of the armed robber’s buddies scrambled to the ground trying to get away from the fight. He and the other guy holding the door ended up getting away, however, the marine was able to disarm and detain the suspect until law enforcement arrived.

“The suspect detained during the incident was a juvenile and was booked into the Yuma County Juvenile Justice Center for one count of armed robbery and one count of aggravated assault. The other two suspects are still currently outstanding,” Yuma County Sheriff’s Office wrote on Facebook.

Authorities said they are still looking for the other two criminals and are not releasing the name of the heroic marine for now. Overall, lives were saved and there were no injuries involved during the dangerous incident.