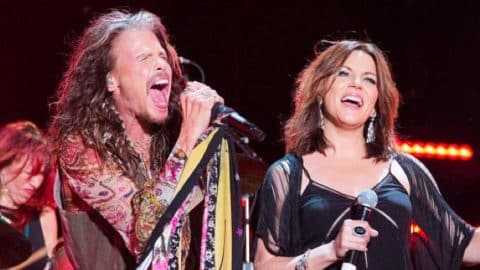 During the annual CMA Fest in 2016, the rockstar-gone-country singer got a surprise from one of the genre’s legendary female performers. Steven Tyler went country for his 2016 solo album We’re All Somebody from Somewhere, which debuted at number 19 on the Billboard country albums chart.

Hear the brand new solo album, "We're All Somebody From Somewhere," on Spotify NOW!

His debut country album eventually went to number one on the charts and included a new version of the Aerosmith song “Janie’s Got A Gun,” and it also produced the Top 20 single “Love Is Your Name.”

Known for the chart-topping singles “Wild Angels,” “Wrong Again,” “I Love You,” “Blessed,” and many other Top 10s like “This One’s For The Girls,” “I’m Gonna Love You Through It,” and “Concrete Angel,” Martina McBride definitely has become a force to be reckoned with and in one fell swoop she gave the Aerosmith-frontman a surprise that left him delighted!

Prior to singing one of Aerosmith’s most iconic songs “Cryin’,” Steven Tyler waved to the massive crowd of fans and introduced McBride, who walked out from the side of the stage.

This was a performance no one in the audience saw coming.

They delivered a fiery-hot rendition of the 1993 power ballad that left every single audience member breathless. They each sang a bit of the verse solo and came together for the very powerful chorus. The fans were loving every second of the 4-minute duet, including the loving embrace the two shared before McBride exited the stage.

Watch this amazing duet between Martina and Steven in the video below!