By Manly Bryant on March 7, 2022
Advertisement 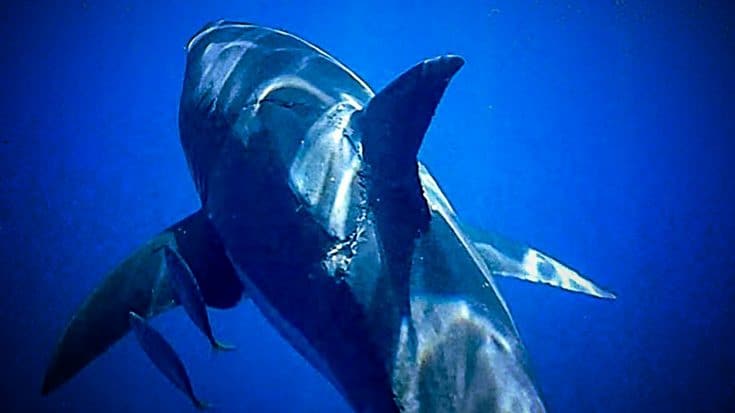 Jalil Najafov, a filmmaker, photographer, and shark conservationist was onboard the Pacific Fleet boat for a five-day great white shark expedition to Isla Guadalupe in Mexico when he spotted a massive shark with a huge bite mark on its side in August 2019.

The shark was estimated to be 15 feet long.

Najafov said he was invited to shark dive where it’s best known for scuba diving experiences and encounters with great white sharks, and that spot is located near the Guadalupe Island, a volcanic island 130 nautical miles (~150 regular miles) off the west coast of Mexico’s Baja California Peninsula.

“On the second day of the trip, I was lucky enough to meet and film Seabatch,” Najafov tells PetaPixel. “On the last day, I saw this shark from the boat. Before we left the island, she swam past our boat as if she wanted to say goodbye.”

After spotting the scar on the shark, Najafov jumped into an underwater cage to get a better photo and was able to snap some good footage on his GoPro HERO7.

“I guessed that it was an act of aggression since mating usually leaves scars in the gill areas,” he said. “I knew that I had filmed very rare footage, and it could go viral on social media.”

According to wildlife specialists, the scars on the shark could be due to mating rituals, aggression, or something else.

Najafov took photos and videos of the shark but ended up losing track of the memory card with the bite mark photos on it until 2021 and posted them to his Instagram to ask his followers what they thought of the footage.

“The video of mating scars on sharks went viral, and I started receiving media inquiries for more information on the subject,” Najafov said. “I thought it was a good chance to show the ‘real’ bite marks. Before I posted Seabatch (Survivor) again on my page, I decided to ask my friend, scientist Dr. Tristian Guttridge’s [VP/Director marine nonprofit Saving the Blue and Discovery Channel’s Shark Week presenter] opinion, and his answer was the same as mine. So, I posted the photo, and it went super-viral…”

Michael Domeier, a Shark Week presenter, and President/Executive Director of the Marine Conservation Science Institute, also believes it was an attack from another shark.

See Footage Of The Shark Below