By Manly Bryant on May 6, 2021
Advertisement 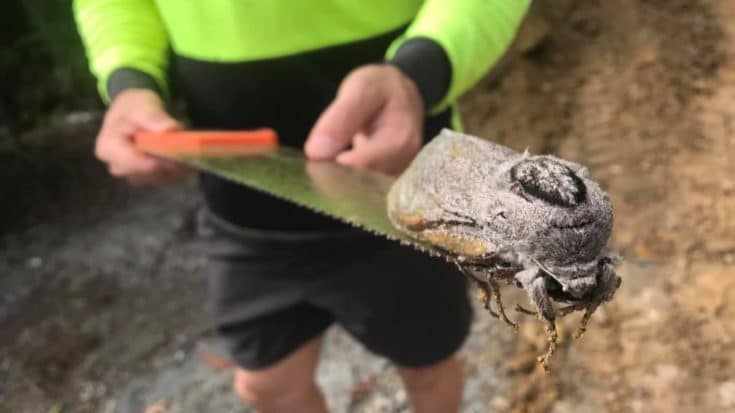 Meagan Steward, the principal of Mount Cotton State School shared two photos of a giant wood moth that was found on the school’s property this past weekend.

Meagan also got on the ABC Radio show Breakfast with Craig Zonca and Loretta Ryan and revealed that the moth was found by construction workers who were working on a new building being built on the property.

They placed the moth on a worker’s saw to show its size.

The construction workers took a couple photos of the moth and released it back into a forest that was nearby the school. Experts estimated the gigantic wood moth’s wingspan to be 10 inches and weigh up to one ounce.

“They fly very, very poorly,” Dr. Christine Lambkin, the head of entomology at Queensland Museum told ABC Radio. “In most cases when the females emerge, they just crawl up a tree or stump of a fence post and wait for the males to find them.”

They have a variety of patterns ranging from light and dark grey to brown on the wings and are found in Queensland, Australia, and New Zealand. As larvae, they bore into the Eucalyptus species and then the pupation period takes place in a hole.

Watch Footage Of Another Giant Wood Moth Below