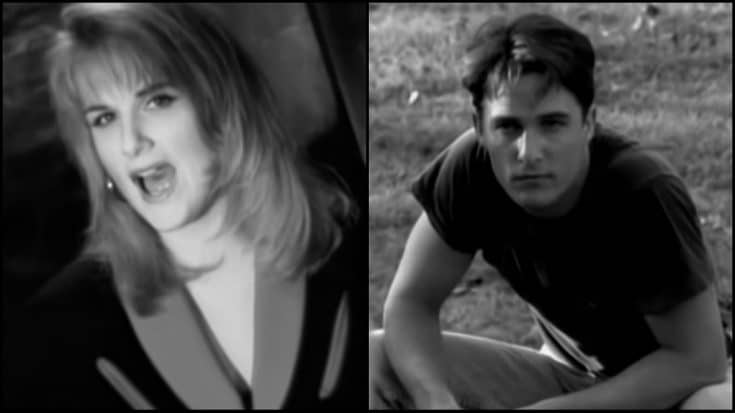 Long before he won an Academy Award and became one of Hollywood’s most sought after actors, Matthew McConaughey appeared in the music video for Trisha Yearwood’s hit single “Walkaway Joe.” The actor made his television debut doing a murder reenactment on Unsolved Mysteries and had appeared in a number of local television commercials, but his appearance on “Walkaway Joe” was the first time he appeared in a music video. Shortly thereafter, McConaughey landed the role of David Wooderson in Dazed and Confused, his first big screen acting gig.

In a recent interview with radio host Bobby Bones, Yearwood jokingly takes credit for McConaughey’s success, saying, “I’m absolutely responsible for his career. He was in the video for ‘Walkaway Joe.’ He was an aspiring actor…and they cast him. If you go back and watch that video he just looks like this little kid.”

23-year-old McConaughey was just one year away from the big break that would set him on the road to superstardom when he played the lead role in Yearwood’s music video. In his first big screen role, the smooth-voiced actor appeared in Dazed and Confused, a movie that also provided his legendary catch phrase, “Alright, alright, alright.” But, McConaughey almost didn’t land the role that would change the course of his career.

McConaughey wasn’t originally cast in the film. According to The Daily Beast, Matthew was having some drinks at the bar of the Radisson in Austin, Texas, where the cast of Dazed and Confused was staying. “The bartender says to him, ‘See that guy down there? That’s Don Phillips. He cast Sean Penn in Fast Times.’ And Matthew goes, ‘I’m gonna go down and talk to this guy.'” But, it wasn’t love at first sight. Phillips initially thought that McConaughey was too handsome for the role.

Thankfully Phillips eventually cast McConaughey, and thankfully he left a little mark on country music history for us to enjoy. In the years since, McConaughey has cemented his role as one of the south’s favorite actors. He has often appeared to present awards on country music awards shows. His appearance at the 2009 ACM Awards where he presented Carrie Underwood with the Entertainer of the Year trophy is still talked about today, thanks to his infamous story about George Straits boots.

Watch Matthew McConaughey in the 1992 video for “Walkaway Joe” below.