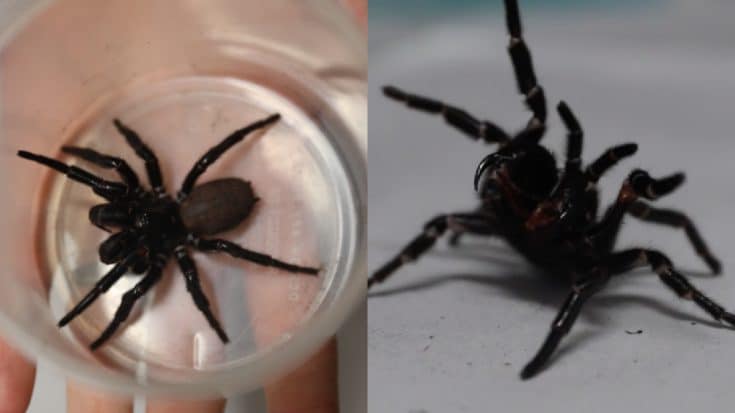 A massive funnel web spider was recently donated to the Australian Reptile Park, and keepers said that the arachnid is the largest they’ve ever seen. If that fact wasn’t nightmarish enough, the spider also has fangs strong enough to pierce a human fingernail.

The funnel spider was received by the park as part of a collection from spider drop-off points, and keepers named it “Megaspider” due to it’s unusually large size. “Measuring in at 8 cm (3.15 inches) with fangs that are almost 2cm in length, this sizable spider could bite through a human fingernail,” a statement from the reptile park claims.

The average funnel spider is 1 1/2 to 2-inches long, which is why Megaspider seems unusually large. This particular species boasts a dark, shiny and almost hairless body, eight eyes and large curved fangs. To put the size of Megaspider’s fangs into perspective, they are roughly as long as the diameter, or distance across, a penny!

The Australian Reptile Park encourages citizens to carefully and safely catch funnel web spiders to donate to the anti-venom program. As part of the program, the staff milk venom from the spider that is then turned into anti-venom that reportedly saves up to 300 lives a year.

“Having MEGASPIDER handed into the venom program is so amazing, in my 30+ years at the Park, I have never seen a funnel web spider this big!” Michael Tate, Education Officer of the Australian Reptile Park said. “She is unusually large and if we can get the public to hand in more spiders like her, it will only result in more lives being saved due to the huge amount of venom they can produce. We are really keen to find out where she came from in hopes to find more MASSIVE spiders like her.”

See footage of Megaspider in the clip below.