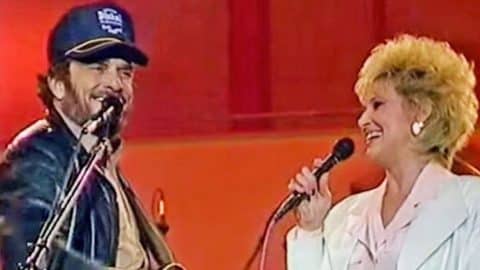 Duets: Some Of Country’s Most Ionic Tracks

Whenever country artists collaborate with one another, the result is typically one that people continue to talk about for years to come.

I'm a killer for a killer duet. and the country duets are always the best. Easy, Don't You Wanna Stay, Remind Me. yep

So when two country legends get together to share the stage or work together on a song, you can bet that collaboration is one for the history books.

One such history-making performance took place in the UK in 1988, when Tammy Wynette joined Merle Haggard on stage for a duet of one of his signature songs, “Okie from Muskogee.”

Written by Haggard and Roy Edward Burris, the song was a number one hit following its release in 1969.

By the time Haggard and Wynette joined one another on stage for their “Okie” duet, they were both some of the biggest names in the business. So we’re sure Haggard’s fans were pleasantly surprised when Wynette stepped out and joined him on stage in the middle of the song.

Haggard and Wynette were all smiles during their performance, as Wynette allowed her beautiful voice to harmonize with Haggard’s more ragged sound. The crowd fed off of the energy they put out on stage, and clapped along to the music as they sang.

Once the performance was over, the crowd roared with excitement while Haggard and Wynette shared a friendly embrace and a kiss.

Then as quickly as she came, Wynette made her exit, all to the thundering applause of the crowd.

You can watch Haggard and Wynette’s historic collaboration on “Okie from Muskogee” in the video below.

We miss Haggard and Wynette so much, but we are glad we have moments like this to remember them by.