Meteorologist Gets Interrupted By Cat Mid-Report

By Manly Bryant on November 17, 2020
Advertisement 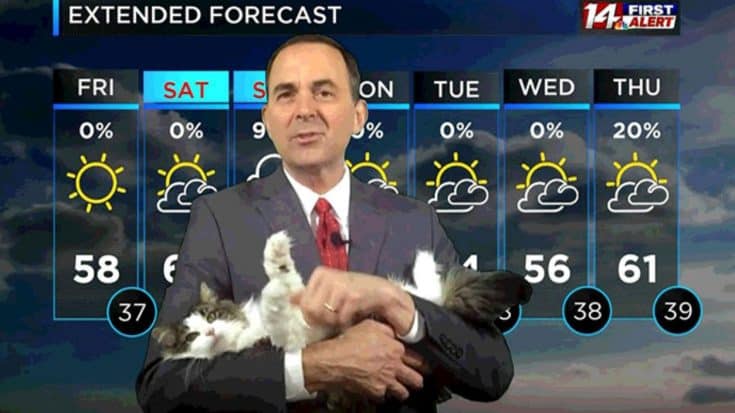 Jeff Lyons, Chief Meteorologist for WFIE’s 14 News, converted his dining room into a home office during the pandemic so that he could give the weather report.

Working from home required Jeff to set up a green screen that stretched all the way across his dining room. After placing the teleprompter on the dining room table and putting on a fresh-pressed suit, Jeff was ready to do his job.

Lyons recently told Bored Panda, “Working from home has been an adventure. I have my studio and green screen set up in the dining room. It’s nice to have a 30-second commute after the late news.”

As Jeff was giving one of his weather reports, his cat Betty was underneath the dining room table and he said something about it. The director then asked Jeff if they could see her and so he picked her up and put her in front of the camera.

“We just had the final 30-second weather to do, so I kept her in my arms just for fun…little did I know!” Lyons added.

The viewers loved it and now more people watch the show, not for the weather though, they are hoping to see Betty pop up on the screen again. Take a look at her below.