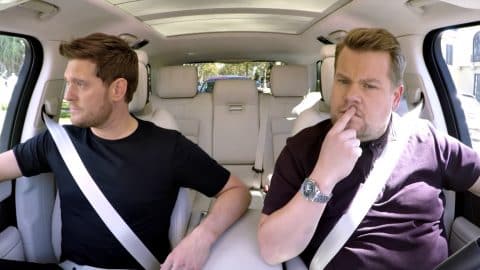 Carpool Karaoke segments with The Late Late Show‘s Jame Corden have become wildly popular among late night television audiences. In the segments, Corden invites celebrities to join him for a drive and together they sing along with the artists most popular hit songs. Carpool Karaoke is usually features light-hearted, funny moments, but a recent segment featuring pop star Michael Buble turned emotional as he recalled his son Noah’s cancer diagnosis at age 3.

In October 2016, Michael Buble’s son Noah was diagnosed with liver cancer. Buble and his wife, model and actress Luisana Lopilato, immediately put their careers on hold and moved their family to the United States where Noah would receive treatment. For seven months, the Buble’s stayed at Noah’s bedside. The now-5-year old little boy was eventually declared cancer free, a moment that Buble will never forget.

“When this all started, I became the strength to somehow pull us and lift us and to be positive. When they got [the cancer] out and the chemo was done and they said, ‘We did it, it’s good, he’s okay,’ I fell, I just fell. My wife picks me up now,'” Buble said.

It took awhile for Buble, who has sold more than 75 million albums and has won four Grammys, to re-enter the spotlight. When he finally spoke out following his son’s cancer battle, he had a new perspective on life and on his career.

“Going through this with Noah, I didn’t question who I was, I just questioned everything else. Why are we here?” Buble told DailyMail. “Is this all there is? Because if this is all there is, there has to be something bigger.”

As the fragility of life became real to Buble, so did the reality of celebrity narcissism, something he admits he had allowed to creep into his every day life.

During his appearance on The Late Late Show‘s Carpool Karaoke segment Friday night as part of a special Stand Up to Cancer event, an emotional Buble fought back tears as he talked about the heartbreaking ride his family had been on during the last two years.

“It’s so hard to have to acknowledge it because it’s so painful to talk about,” Buble told Corden. “But, obviously, we got the diagnosis and that was it, man. My whole life ended.”

The singer struggled as he revealed that the doctors told him and his wife that the prognosis “wasn’t great.” The family took it one day at a time.

“My sister, my mom, my dad, my wife’s family…they all pulled their kids out of school. We all moved. We had the best doctors.” Corden then asked Buble how the family got through the worst of days. Buble responded by saying, “It’s weird, man. I’m not okay.”

Buble plead with viewers to contribute to cancer research.

“There’s hope and treatments and there’s medicines haven’t been discovered and will be discovered because of you,” the “It’s A Beautiful Day” singer said. “You think you’re one little person who can’t change, but all of us can completely, completely make that huge difference. If you do it and you save just one little person, that’s it. That’s what life is, that’s all that this is. Simple.”