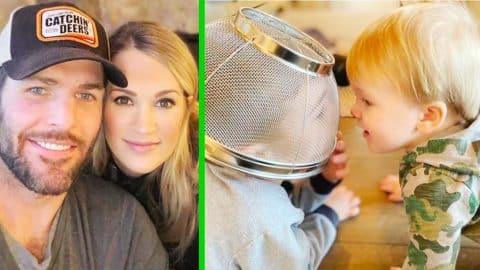 When Carrie Underwood and Mike Fisher welcomed their second son, Jacob, on January 21, 2019, fans were surprised by multiple photos the couple chose to share of their new baby boy. Carrie and Mike have always been selective when it comes to sharing photos and videos of their eldest, Isaiah (age four), and only posted a photo of his hand when he was born.

Hence the reason why fans were so surprised by the photos of Jacob, since all showed his face.

But after those initial pictures, Carrie and Mike would only post a picture or video of Jacob every few months. Until recently, the last time he was seen on Carrie’s social media accounts was on Halloween.

The “Drinking Alone” singer posted a picture showcasing her family’s Halloween costumes. Isaiah dressed as the Grinch, while Jacob coordinated with him by dressing as the Grinch’s dog, Max.

Hope everyone had a good #Halloween ! Lots of love from Cheer Bear, The Grinch, Max and Buck Daniels…

That was the last photo fans saw of Jacob until Tuesday (January 21), which was his first birthday! In celebration, Carrie took to Instagram and posted not one, not two, but three new pictures of her baby boy.

All of the photos show Jacob devouring his birthday cake, which was a chocolate cake with green icing. It matched his little camo outfit perfectly!

“I can’t wait to see your personality continue to shine!” Carrie wrote in a caption accompanying the photos.

Happy birthday, Jacob! How are you already 1 year old? You are smiley, crazy, smart, soooo fast and into everything! And, apparently, you love cake! I can’t wait to see your personality continue to shine! I have a good feeling you’re going to keep us all on our toes for years to come! I thank God for you each and every day. You are truly our miracle baby!!! Mommy loves you! Swipe to see how cute the cake was before Jake got ahold of it! 😂

Mike also celebrated his son’s birthday by sharing a rare photo of him on his own Instagram…and the picture he posted features Isaiah as well.

The adorable picture shows the two brothers resting on the floor together, with Jacob looking at Isaiah in wonder. Maybe he was curious to know why Isaiah had a pasta strainer on his head?

“Happy birthday Jacob!” Mike wrote in the photo’s caption. “You’ve brought us so much joy this past year.”

The precious picture he posted of Jacob and Isaiah certainly brings us joy! You can see it below.

Happy birthday Jacob! You’ve brought us so much joy this past year. Esphesians 3:20

It’s hard to believe that Jacob is already a year old. He has grown up fast, and so has his big brother, Isaiah.

We remember when Isaiah was Jacob’s age…it seems like it was only yesterday. Carrie embarked on her Storyteller Tour when Isaiah was still just a baby, and featured some of his earliest photos in a video montage that played during each show.

The montage accompanied her song “What I Never Knew I Always Wanted.” After the tour, Carrie shared the video online, and it’s as cute as can be. Relive Isaiah’s early years by watching that video below.

Before we know it, Jacob will be just as grown-up as Isaiah is today!