By Manly Bryant on November 30, 2022
Advertisement 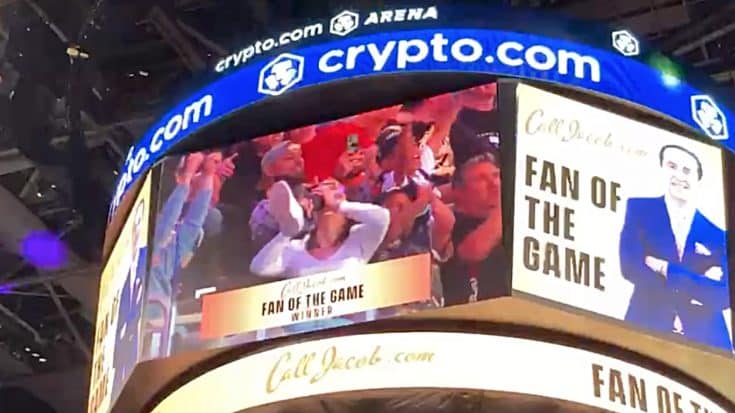 Annika Hutsler, a United States Marine veteran and a fan of the Los Angeles Lakers was attending game the against the Indiana Pacers at the Crypto.com Arena Monday night when she was caught on camera chugging a beer from her prosthetic leg.

The moment happened right before the Indiana Pacers won the game on a buzzer-beater and officials wanted to give the fans something to cheer about so they announced that Hutsler was “fan of the game” and pointed the camera at her.

In response to being called out and placed on the big screen, she decided to take off her prosthetic leg and pour a beer into it before chugging it for the entire arena to watch.

Everyone cheered her on and she made the game fun for everyone who was there and those watching at home. Officials loved it so much, they gave her a $100 gift card for the stunt.

A woman just took off her prosthetic leg and drank a beer out of it at the Lakers game. Needless to say, she was named the fan of the game pic.twitter.com/rFskWi6sXb

Annika Hutsler, who had her leg amputated in 2019, said she suffered a foot injury in 2017 and was fighting through the pain when she learned in Feb 2018 that she had an intramuscular arteriovenous vascular tumor.

Doctors attempted to save her foot for the next 14 months but because the multiple surgeries failed, her foot became prone to infection and had to be amputated.

That didn’t stop her from being awesome though.

She went on to participate in the 2022 Warrior Games and said her goal was to make the 2026 Paralympic Games.

Hutsler was also named Miss November 2023 in the 17th annual Pin-Ups for Vets calendar. The award-winning nonprofit raises money to support hospitalized and deployed troops and was founded in 2006 by California resident Gina Elise.

One thing the nonprofit does is it produces World War II-inspired bombshell calendars featuring veterans as models and Hutsler explains how “in awe” she was when she was turned into a glamour girl for her photo shoot.

“I model, so I’ve seen what I look like on camera,” Hutsler said, according to FOX. “But with the hair, makeup and dresses, I looked like someone from that era. … I just remembered walking in [on set] and seeing all the dresses ready. The music from that era was playing. It was just a really fun experience to get dolled up in that way.”

Her First Year As An Amputee In The Video Below