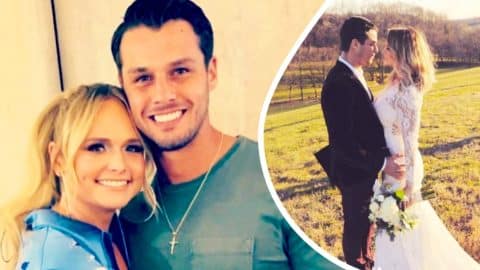 On January 26, 2019, Miranda Lambert secretly married NYPD officer Brendan McLoughlin in Tennessee (Brendan has since retired from the NYPD).

The country superstar kept her marriage under wraps for several weeks before announcing the news on February 16:

“In honor of Valentine’s Day I wanted to share some news,” Miranda wrote next to two wedding photos. “I met the love of my life. And we got hitched! My heart is full. Thank you Brendan Mcloughlin for loving me for…. me.”

Miranda later shared that she and Brendan were married on her porch.

In a 2019 interview with People, she said “nobody” was in attendance to watch the ceremony, not even her best friends and bandmates in the Pistol Annies. “I didn’t have nobody,” she said. “That was mine and his moment.”

On their one-year anniversary in 2020, Miranda shared an additional, never-before-seen wedding photo. She wrote, “I’m so happy to walk through this life with you.”

Since then, Brendan has set up his own Instagram, which is where he often shares snapshots from his daily life with Miranda. So when their second anniversary came around, he made sure to put up a post in honor of the occasion.

Brendan posted a picture of Miranda standing in the kitchen while wearing a comical apron about Balls canning jars. He kept his anniversary message short and sweet, writing, “Happy anniversary to this amazing woman.” Brendan also tagged his wife in the post and included a flame emoji.

As for Miranda, she acknowledged her anniversary by sharing a photo taken on the set of her music video for her current single, “Settling Down.” Brendan played her love interest in the clip…marking his music video debut.

“2 years hitched!!” Miranda captioned the affectionate picture of her and her husband. She tagged Brendan in the post and included a heart emoji next to his name.

Now, see the clip Miranda got that picture from by watching the official music video for “Settling Down” below. She and Brendan have so much chemistry!

Join us in wishing Miranda and Brendan a happy anniversary! We wish them many more years of love and happiness together.