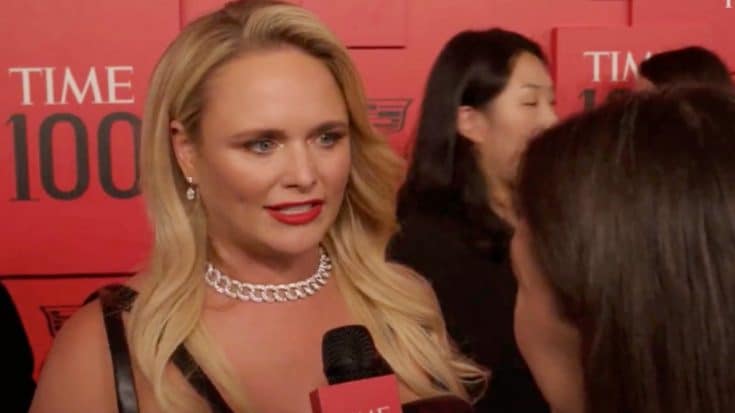 TIME recognizes 100 of the world’s most influential people in its annual TIME100 list. This year, country music superstar Miranda Lambert was honored as one of those 100 people.

Lambert celebrated the honor in a post on social media, writing:

“I’m so honored to join this year’s class of #TIME100. I only ever wanted to sing and write songs and thanks to y’all I’ve gotten to do that and so much more. Thank y’all for being on this journey with me.”

Lambert and the other members of this year’s TIME100 class were honored during a gala held in New York City on Wednesday night (June 8). TIME reports that Lambert kicked off the event with a performance of one of her new songs, “Actin’ Up.” She also sang her emotional song “Tin Man” from her 2016 album The Weight of These Wings.

“I don’t really know what got me here besides three chords and the truth, because that’s what I live by,” she said.

While walking the red carpet, Lambert spoke about how honored she is to be a member of the TIME100 class:

“It’s a huge deal to me. I was actually shocked, but I’m so thankful to be a part of this and know all the work I’ve done over the last 20 years in this industry has gotten me here and i’m doing some change for good,” she told TIME.

You can catch the TIME100 Gala at 8 PM on Sunday (June 12) on ABC. This is the first time the gala has ever been featured in a televised event. We hope Lambert’s performance will be featured on the special!

Watch one of Lambert’s red carpet interviews from the Gala below.

Just before her performance at the #TIME100 Gala, Miranda Lambert stopped by the red carpet to reflect on her year, her accomplishments, and the evolution of her genre https://t.co/tC7d6mG9gx pic.twitter.com/BxXVzdhrhK