Miranda Lambert Kisses Husband In Steamy Video For “Tequila Does” 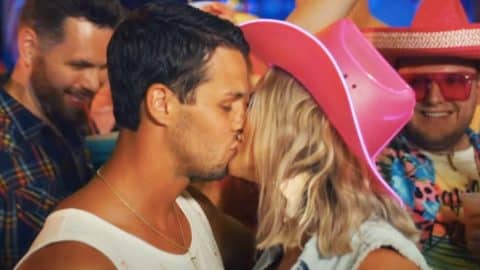 Even though she only ever released it as a promotional single, Miranda Lambert‘s “Tequila Does” is one of her fans’ favorite songs. It first appeared as a track on her 2019 Grammy-winning album Wildcard.

Later, Lambert remade the song with its cowriters Jack Ingram and Jon Randall. The trio recorded an album called The Marfa Tapes, which features raw recordings of songs they’ve written together, including “Tequila Does,” “Tin Man,” and “In His Arms.”

The trio came together to perform “Tequila Does” around a campfire during the 2021 CMT Music Awards in June.

Then, on August 3, fans got another new version of “Tequila Does.” Lambert released a remixed version of the song, with the remix being made by Nashville-based DJ Telemitry.

To go along with the remix, Lambert filmed a fun-filled music video at her pool. She got her family and friends involved in the clip, including her husband Brendan McLoughlin.

“Just capturing fun moments. I am so glad to have had my friends and family be part of it and we had a blast!” Lambert said of the video on social media.

McLoughlin shared some behind-the-scenes photos from filming that show him with his two brothers. They were also in the video!

“When your cowgirl ropes you in for another video you call in your brothers for backup,” McLoughlin captioned the pictures of him and his brothers rocking some bright-colored swim trunks.

Lambert and McLoughlin appear in many flirtatious scenes in the music video. At the end of the clip, the two come together and share a passionate kiss while their friends dance and party around them.

Check out that steamy moment by watching Lambert’s new video for the remixed version of “Tequila Does” below!