Miranda Lambert Posts Photos Of Husband Brendan With Their Dogs

By Miranda Raye on April 27, 2020
Advertisement 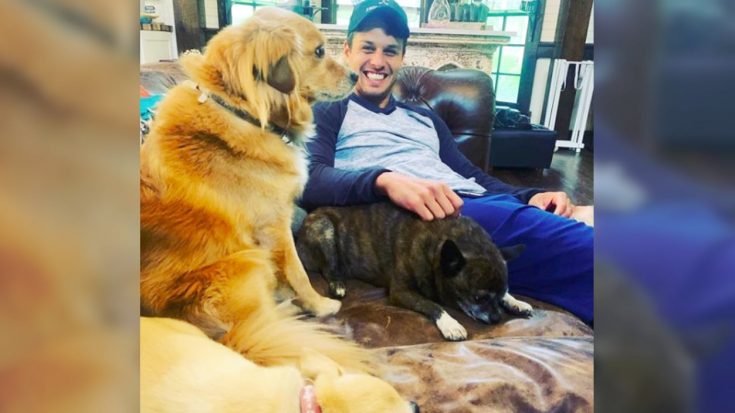 At last count, Miranda Lambert has nine dogs, a whole bunch of horses, some cats, and some bunnies. Her furry family seems to grow by the day, which is why it’s sometimes hard to keep track of exactly how many pets she owns.

As her husband, Brendan McLoughlin, has learned, it is also hard to find a place to sit when you have that many pets (specifically dogs) in the house!

Miranda took to Instagram to share a slideshow of photos from her and Brendan’s Sunday at home. The first picture shows her cooking vegetable soup in her dinosaur pajamas.

The next photo shows the garden the couple has been working. Picture #3 showcases one furry friend…Sugar Pie the mini horse!

Then comes picture #4, which shows Brendan grinning ear-to-ear as he wiggles onto the couch next to the three smallest pups in the family…Delta Dawn, Cher, and Bellamy.

Miranda said he was  “laughing at the number of dogs we have tryna find somewhere to sit.”

She also included a video of their chicken coop and a picture of one of their three Great Pyrenees dogs, JD. Miranda said the fluffy white pooch was in her way in the kitchen, and “always” is.

Sunday’s best. What are y’all doin? T-Rex sweats ( my fav but of course the matching shirt has a red wine stain ) Vegetable Soup Garden of Eatin’ Sugar Pie the mini horse Brendan laughing at the number of dogs we have tryna find somewhere to sit Coop De Ville in full swing JD in the way, in the kitchen. Always.

Other than JD, Bellamy, Cher, and Delta Dawn, Miranda and Brendan’s other canine companions are Thelma, Louise, Waylon, Jessi, and ROE.

While things can get a little crowded with nine dogs in one space, Brendan doesn’t seem to mind. Taking to her Instagram Story, Miranda shared another picture from her Sunday that shows Brendan cuddling with Delta Dawn.

Even Delta Dawn looks like she’s smiling at the camera!

How sweet is that picture?

It was essential for Miranda that her husband loved dog. As she told Taste of Country, she would have called things off with Brendan if he didn’t like her pups.

“I was like, ‘Hey, if you don’t like dogs, that’s kind of a deal-breaker,” she said. Thankfully for Brendan, Miranda says, “He actually loves [the dogs] to death.”

The pictures Miranda shared from their Sunday prove Brendan loves being a dog dad!