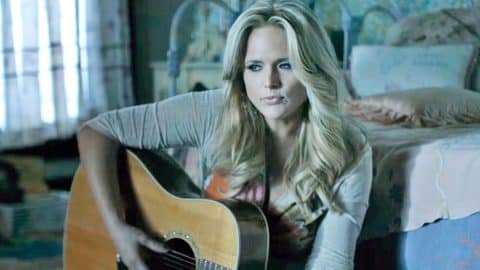 On February 12, 2010, Miranda Lambert released her emotional single “The House That Built Me” to radio. Little did she know at the time that the song would become her fastest-rising single and first number one hit.

Waiting for the day I don’t cry when “The House That Built Me” by Miranda Lambert comes on.

Now, “The House That Built Me” is considered as one of Lambert’s signatures, but it almost wasn’t hers.

Written by Tom Douglas and Allen Shamblin, “The House That Built Me” was originally intended for Blake Shelton, whom Lambert was in a relationship with at the time.  When Lambert heard the song, she knew she wanted to record it herself, since it reminded her about her own experiences growing up.

What It Means To Miranda

Lambert’s parents spoke to Today shortly after the release of the song, and explained their family’s personal connection to it. After the family came across hard times, they were actually homeless for a short while before Lambert’s mom found a rental property that they could make their family home.

“What my wife failed to tell you is that house was in such bad shape they were going to bulldoze the house down if we didn’t rent it,” Lambert’s father said.

Dad dropping me off at the Nashville Star house in 2003. What a journey we have been on. When I was 17, he taught me 3 chords on the guitar. He said that's all I needed. For the most part he was right. Thanks for giving me life, love and dimples! And thank you for sharing your love for music with me. Love you dad. #RickLambert❤️ #happyfathersday

Although Douglas and Shamblin did not write the song with Lambert in mind, there are multiple parallels between the song’s lyrics and her life story.

Like the narrator in the song, Lambert also did her homework and learned to play guitar in a small room at the top of the stairs. Also like the narrator, Lambert’s beloved dog was buried in the backyard of her family home.

Overall, Lambert shares a deep connection with the narrator and lyrics of the song because she too, became the person she is today thanks to the childhood house that built her.

“It’s such a sad story, but it’s really such a happy story because it really just built our family back and it made us stronger than ever,” Lambert said. “And it made me.”

You can watch the official music video for Lambert’s “The House That Built Me,” below. Even after all this time, this song still manages to tug at our heartstrings every time we hear it.