By Manly Bryant on April 15, 2020
Advertisement 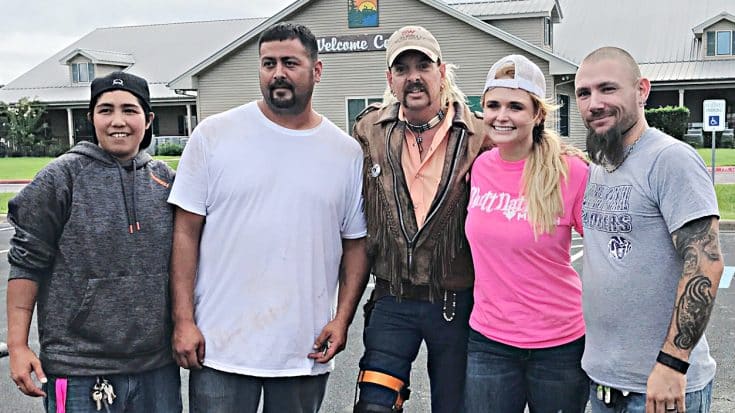 The Netflix show Tiger King is all anyone can talk about, Miranda Lambert included.

Tiger King is the binge-worthy series on Netflix that millions of people have watched. The series is about an Oklahoma zoo owner named Joe Exotic and his arch-nemesis, a woman named Carole Baskin who runs an animal sanctuary in Florida. Joe approached a hitman to murder Carole and was convicted on two counts of murder for hire in 2019. Joe is currently in prison serving a 22-year sentence.

Although Joe is locked up in his prison cell, he has skyrocketed to fame with the release of the series.

Miranda Lambert took to Twitter on April 13, 2020, to post a throwback photo of her and the Tiger King, Joe Exotic himself.

Within the post there were three separate photos that feature her, Joe Exotic and other zoo employees who are also featured in the show, including his ex, John Finlay. Miranda was sporting a MuttNation Foundation shirt, representing her charity, and you can visibly see the MuttNation van in one photo.

Miranda poked fun at the old photos with Joe and used a hashtag referencing a song from her new album Wildcard called “Way Too Pretty For Prison,” with a couple laughing emoji faces.

Shortly after Miranda posted the photo, she received backlash from her followers about posing for a photo with Joe. They wanted to know why Miranda – an animal rights advocate and founder of MuttNation would dare to be associated with a convicted felon and zoo owner with more than a dozen wildlife violations.

Within a couple of hours, Miranda responded to her post with an explanation.

“Some guy named Joe volunteered his trailer and staff. Now I know it’s “Joe Exotic” I’ve never been to his zoo, and I didn’t even know he had tigers. OBVIOUSLY I’d never condone animals being treated badly.”

See her full response to the backlash below.