By Jennifer Pernicano on October 31, 2019
Advertisement 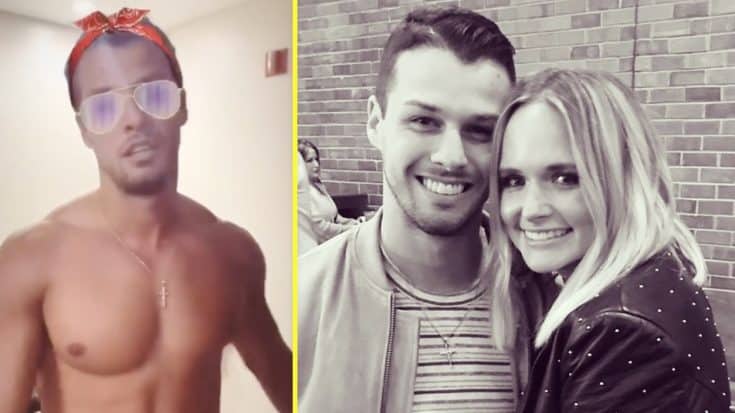 For the past few months, Miranda Lambert has been promoting her upcoming album, Wildcard.

On July 17, she promoted her first single off the album with an Instagram post that got people talking.

The night before the song, titled “It All Comes Out In The Wash,” dropped, Lambert shared a short clip that shows her husband, Brendan McLoughlin, doing the laundry. It just so happened that he was shirtless while doing so, flaunting his washboard abs for her 3.6 million Instagram followers.

She captioned the video, “It All Comes Out In The Wash (board).”

“It All Comes Out In The Wash (board)”. Tomorrow 6am ET#putthatsuckeronspin ???‍♀️?? house husband shirtless promo vol 1. #NYPD #ihadto #hotcop #NEWSONG #yourewelcome

She also wrote that it was “house husband shirtless promo vol 1,” insinuating there might be more – and she hasn’t disappointed.

Once again promoting a song, this one called “Way Too Pretty For Prison” featuring Maren Morris. Lambert shared her “house husband shirtless promo volume 2” with her followers on August 26. This time, the video featured a shirtless McLoughlin weed-whacking the front lawn. Lambert crept up, surprising him when she called out to him. The second he noticed she was filming he began laughing, knowing exactly what she was doing it for.

Lambert made us wait three months for “house husband shirtless promo volume 3,” but she finally delivered on Wednesday (Oct. 30).

McLoughlin was finishing up at the sink in the bathroom when his wife of nine months called out to him, “What are you doing, babe?”

He walked out and realized he was caught on camera, shirtless, once again! This time, Lambert used her personalized Instagram filter, which put a pair of aviators and a red bandana on his head.

She wrote, “Loving this filter! Not sure hubs loves it tho!? #Wildcard out 11/1. House husband shirtless promo volume 3. Y’all are welcome.”

The filter is available for anyone to try, but the shirtless husband doesn’t come with it. Watch the video below.

Loving this filter! Not sure hubs loves it tho!? #Wildcard out 11/1. House husband shirtless promo volume 3. Y’all are welcome??