By Miranda Raye on August 2, 2021
Advertisement 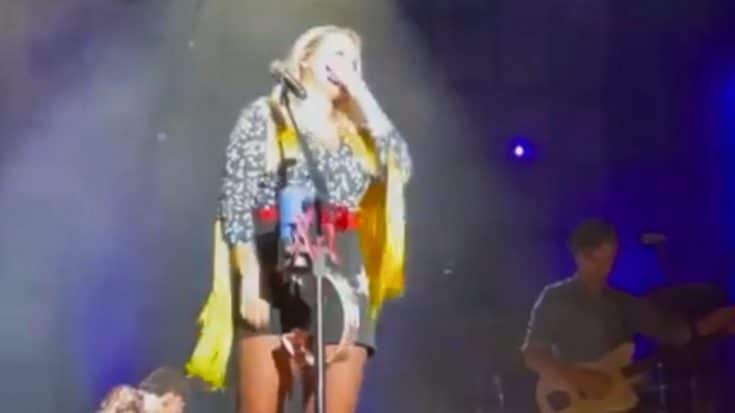 Even though Miranda Lambert has been singing “The House That Built Me” for over a decade, it still gets to her from time to time. Anyone familiar with the song can understand why it continues to make Lambert emotional after all these years.

Sometimes the song hits Lambert harder depending on what’s going on in her life. Such was the case during her show on Saturday night (July 31) at the Guthrie Center in Iowa.

Just two days before the concert, Lambert lost her beloved dog Jessi. She found Jessi and her brother, Waylon, as puppies on the side of the road in Oklahoma in 2008. They were only six weeks old at the time.

Waylon passed away in October 2020. Lambert was grateful they got to have Jessi for a little longer, but knew how much she missed her brother:

“…the truth is they belong together,” Lambert said of her pups. “They always have. I know she missed him terribly and we are so thankful to have had extra time. Today they are reunited at the rainbow bridge. We sent her off with the song ‘Storms Never Last’ from the same record she heard playing the first time I put her in my truck. I can’t put into words what a dogs love does to a heart. But if you have one you already know.”

“The House That Built Me” has one line that tugged at Lambert’s heartstrings a little harder when she sang it two days after Jessi’s death. The line is about the narrator’s childhood dog, and goes, “And I bet you didn’t know under that live oak, my favorite dog is buried in the yard…”

When reflecting on the show on social media, Lambert confessed that line “got [her] pretty teary” in the aftermath of Jessi’s death.

A fan-filmed video shows Lambert struggling through “The House That Built Me” in the lead-up to that line about the dog. She was visibly emotional, and let the crowd take over while she took a moment to collect herself.

The people in the crowd knew every word to the song, and carried the tune for Lambert until she was ready to start singing again. She also received support from her longtime backup singer, Gwen Sebastian, who stepped forward to give her a hug. After taking a little longer to pull herself together, Lambert finally finished the song.

Watch the touching moment unfold in the video below. This is one performance of “The House That Built Me” that Lambert is sure to never forget.

Her first show since losing her dog, Jess this week? so emotional but so amazing to witness this moment… The House That Built Me @mirandalambert @River_Ruckus @GwenSebastian pic.twitter.com/QM5Mmf43ka