By Manly Bryant on March 19, 2019
Advertisement 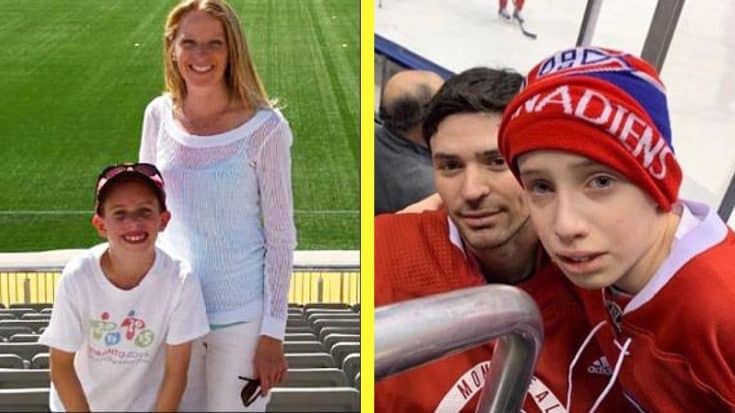 For this 11-year-old boy, meeting his favorite hockey star was something his mom had always promised him she would help him do – especially as she was facing a very difficult battle with cancer.

Tammy Whitehead, the aunt of young Anderson, shared the story of this heartwarming meeting at an early-morning skate practice for the Montreal Canadiens – and how it’s impacted her family’s life in a tremendous way.

Anderson’s mom, Laura McKay, did everything she could to help her son’s dream come true and help him meet the team – and above all, his favorite goalkeeper Carey Price.

For years, she searched for contests, filled out entries, and looked high and low for a way to get her son a meet-and-greet – but their names never got drawn.

“She was the kind of woman that would give everything to everybody else before she would ever take,” Kevin Whitehead, the young boy’s father told TSN.

At 43-years-old, Laura McKay passed away from cancer on November 7th, 2018. And her dream of helping her young son meet his idol was passed onto another family member.

Anderson’s dad then turned to his sister, Tammy Whitehead, and together they hatched a plan to get his son in touch with Carey Price – and see if they could meet!

Through a series of family members and networking, the story made it’s way around until they got a call saying they were invited to watch a morning practice at the Scotiabank Arena in Toronto.

The day was truly an exciting one for 11-year-old Anderson – and after finishing the practice he was overwhelmed with emotion as Price skated off in his direction so they could meet.

Price knew a little about Anderson’s heartbreaking journey to meet him and came off the rink in his gear straight toward the young fan. As tears welled up in the boy’s eyes, Price quickly stripped off his mask and reached out to hug him…it’s a moment that will bring anyone to tears.

Without missing a beat, the two embraced and Price didn’t let the youngster out of his sight without a boatload of signed gear and memories that he’ll cherish for the rest of his life. The only way this meeting could possibly have been better is if his beloved mother had been there – but she surely was watching from above.

Look how big Anderson’s smile is! Amazing and so inspiring to see ?

Watch this incredible moment below…