By Miranda Raye on February 26, 2020
Advertisement 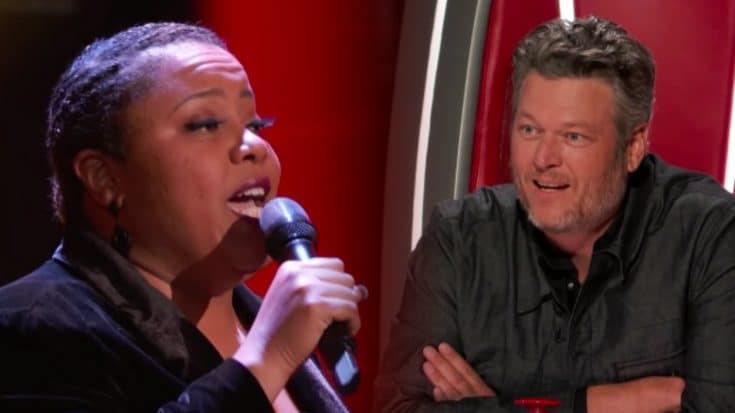 Toneisha Harris has been singing since she was a little girl. Eight years ago, she planned to chase her musical dreams by auditioning for The Voice.

The singing competition would have been fairly new at the time, since it debuted in 2011.

Today, Blake Shelton is the only coach that remains from those early days. Kelly Clarkson, John Legend, and Nick Jonas joined him to coach Season 18.

And so it begins! One month until @nickjonas joins @johnlegend, @blakeshelton, and @kellyclarkson on #TheVoice. ?

But Shelton didn’t get the chance to hear Harris sing for him eight years ago. Her son was diagnosed with leukemia, and she chose to abandon her audition in order to be with him.

Harris then took an extended break from singing as she focused all of her attention on caring for her son. Thankfully, her son won his battle, and he is a healthy college student today.

Now that her son is well, Harris decided it was finally time to pursue her dream of being a singer. She finally got the chance to audition for The Voice, and chose to sing Foreigner’s “I Want to Know What Love Is.”

The coaches were instantly impressed with Harris’ performance. One by one, they turned their chairs around. By the end of the song, all four coaches were facing her.

Clarkson offered some of the highest praise, telling Harris, “Your voice is a total blessing. You are the reason this show exists.”

But it was Shelton who managed to win Harris over. He first brought up the fact that he was a coach when she originally planned to audition. Then, he complimented her voice and told her he’d be honored to have her on Team Blake:

“Sis, every line, every movement in the chorus, it took it to a new level,” Shelton said. “…I know what it’s like to be an artist trying to get the attention of America, trying to win this thing. I’ve done it a lot of times buddy. I’d like to do it with you. I’d be proud to be your coach.”

Harris had a challenging choice to make, but she eventually landed on Shelton as her coach. We can’t wait to see how far she makes it on the show!

You can watch Harris conquer her second chance at Voice stardom by tuning in to her blind audition below.