By Jennifer Pernicano on July 9, 2019
Advertisement 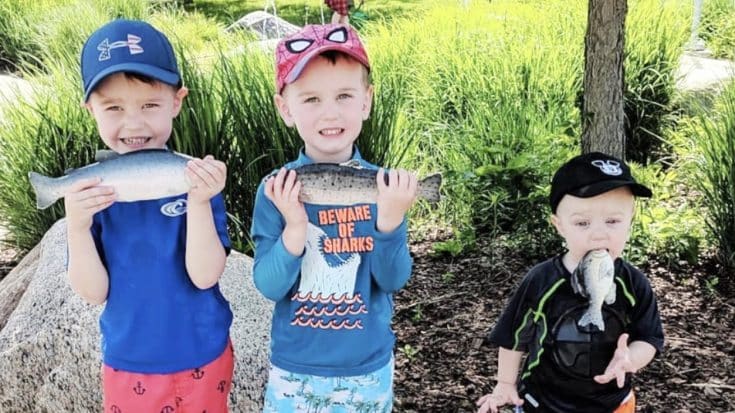 One mom took her three sons to the Children’s Museum in Brookings, South Dakota, and left with a photo that would end up going viral.

Levi, 4, Logan, 3 and Landon Daniels, 18 months, wanted to partake in their favorite activity – the fishing pond, and when they made their big catches, their mother Marika Daniels had to document it. She snapped a photo of the three young boys proudly holding up their catches, but it was little Landon who completely stole the show!

Levi and Logan held their fish in their hands, while Landon put his fish in his mouth! We have to admit, when we first laid eyes on the photo, we let out a good chuckle.

Since Marika posted the photo on social media on June 30, it has gone completely viral – especially when the following meme was created.

Posted by Thefunnypicspage on Saturday, July 6, 2019

The meme has been shared on many, many different pages, each with hundreds of thousands of shares!

“I originally posted it on my Facebook and my friends were saying how funny and cute [it was],” she said. “It just spread like wildfire.”

She went on to assure people that these fish in the Children’s Museum fishing pond were rubber fish, and not actually real.

Marika said, “He’s just at that age where he puts everything in his mouth. They are rubber fish. They’re not real fish. After I saw the picture I said, ‘Oh my gosh, this is actually kind of funny’ — and apparently everyone else thought so too.”

Either way, this photo gave us all a good laugh and brightened our day! Watch the TODAY Show talk about it in the clip below.