Moose Gets Stuck In Pool With No Way Out, Until Officials Arrive 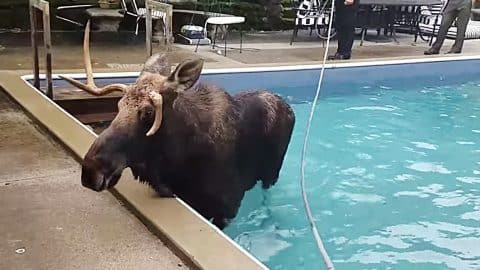 According to ABC News, a young moose was found walking around trapped in a pool that had no stairs for him to climb out of for several hours in Bedford, New Hampshire.

The New Hampshire Fish and Game Department (NHF&G) were called the next morning to come assist with getting him out. They later posted a video of their efforts to their Facebook page showing the moose doing its best to escape.

He Finally Climbed Out Of The Pool

“The pool had no stairs,” the department wrote. “By putting a set of wooden steps in the pool and coaxing the moose towards them, he was able to find his way out and back in to the woods.”

He quickly ran back into the nearby forest and it was a mission complete for the NHF&G. The wildlife officials say since its breeding season for the moose in the area and with this being a young bull he was probably on the hunt for his mate before he found himself trapped.

With the moose breeding season beginning to ramp up, bulls are on the move looking for mates. In his travels, this young bull accidentally found his way into a swimming pool in Bedford last night. NHF&G Wildlife Biologists, with assistance from local Conservation Officers, were able to help remove the moose from the pool. The moose was unable to get himself out after several hours as the pool had no stairs. By putting a set of wooden steps in the pool and coaxing the moose towards them, he was able to find his way out and back in to the woods.