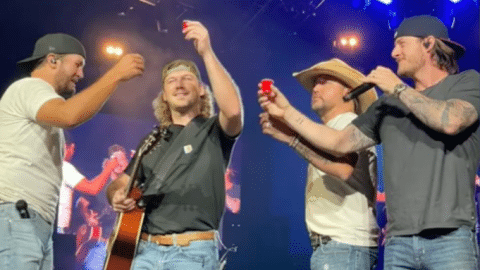 Morgan Wallen made a big return to the stage this weekend (July 30) when he made a surprise appearance at Nashville’s Bridgestone Arena alongside some fellow country stars.

It was only the second time Wallen has performed publicly since February, and he was warmly welcomed by the Nashville crowd as he joined Luke Bryan, Jason Aldean and Florida Georgia Line’s Tyler Hubbard on stage for some shots and to perform a couple of his biggest hits.

Wallen kicked off his two-song set with “More Than My Hometown.”

“This is a song about staying true to yourself. That’s been a really hard thing for me to do lately, but here I am,” Wallen introduced the song.

He followed that performance with his second Number One song, “Whiskey Glasses,” a song the crowd loudly and enthusiastically sang along with. Shortly after the song’s release in 2019, Wallen told the Washington Post that he is proud that the sad song can bring people so much joy.

“I’m proud of what we did on the production side — it’s a sad song at its core….I don’t want this to feel like a sad song,” Wallen said. “And when it comes on, people don’t really seem sad. It’s interesting, it just brings so much joy.”

That joy was evidenced in the massive sing-along that occurred when Wallen performed the tune Friday night.

Wallen took to social media to thank Luke Bryan for the invite to perform and thanked Music City for the warm welcome. The note accompanied a video clip showing the crowd’s reaction to the singer’s surprise appearance on stage.

Following his performances, Wallen, Bryan and Hubbard remained onstage to join Jason Aldean to perform “She’s Country,” his seventh single and second Number One hit. Watch the all-star performance of “She’s Country” in the video below.