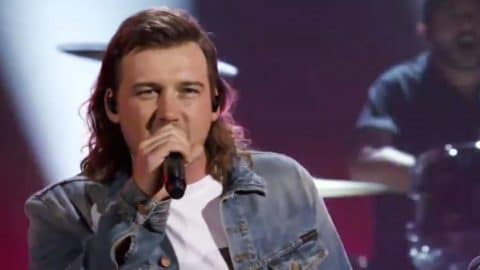 From his early beginnings on the stage of The Voice, this rising country music star has been working toward his big shot for years…and he certainly got it with this song.

Pairing retro themes with new beats and new twists on an old genre, this new wave of country songs is definitely catching on – and in a big way. To exemplify that, look no further than his brand new performance during the 2020 ACM Awards!

Singing to a ghostly and empty concert house didn’t seem to throw this performer off one bit and he nailed this upbeat and fun performance of “Whiskey Glasses” accompanied only by his band on stage.

Dressed in typical Morgan Wallen fashion, he donned a Canadian Tuxedo (denim from head to toe) and a freshly-primped mullet.

Check out a clip of his performance below along with his official music video!

.@MorganWallen just performed #WhiskeyGlasses from Nashville's iconic @opry and it was 🙌! It's not too late to tune into the 55th #ACMawards, turn on @CBS NOW! pic.twitter.com/2Ai1bTwxhy