Mother Hen Refuses To Abandon Her Eggs To Snake 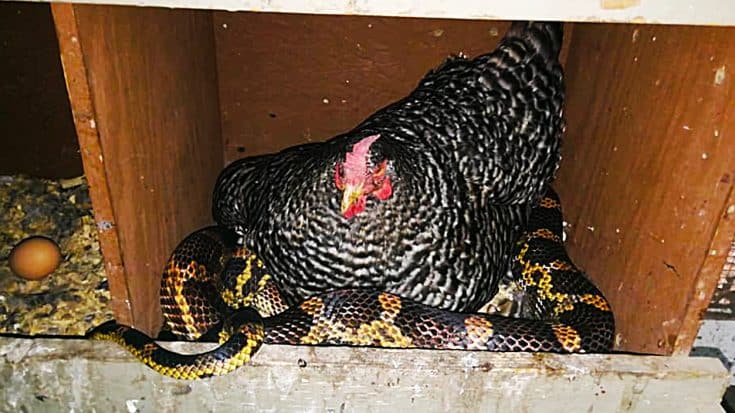 A mother hen not willing to give up her eggs is caught on camera defending them from a fairly large rat snake that crawled into her chicken coop.

The story was posted to Facebook by Sara Allison, who was taking care of her parents’ chickens while they were in the hospital. Allison stumbled across the snake laying in the nest with a chicken named Bernadette who was known to be the best mother hen in the coop and took the picture.

“She’s a good hen. She was a good momma to the chicks my mom got recently. She got 30 and this hen was the only one that would take them in so she spread herself over 30 chicks lol. It was pretty cute to see.”

Bernadette apparently wasn’t ready to give up her motherly duties just because a snake was in her nest and the snake wasn’t about to stop the hunt so both are seen cuddled up together. We’re not sure how it started but it looks like maybe the hen was sitting there first and the snake slithered its way around her and the eggs.

After reading Allison’s post though we found out the snake is no stranger to the chicken coop. He’s actually a well-known snake that’s been living in her dad’s old broken down Ram Charger for 4 years.

The snake was her dad’s friend and was spotted on many occasions eating eggs from the chicken coop and they let the snake hang around because it also kept the rats and rodents back.

It was just strange seeing both the chicken and the snake together. Allison didn’t know what to do so she left the snake alone to go post on a Facebook group called “What snake is this? Southeast Texas” to show people.

Allison wrote, “Look at this dummy! Too stubborn to get up when a rat snake wants a meal lol. What should I do? I’m taking care of some stuff for my parents while they are sick and in the hospital. My brother hurt his back so he can’t climb up the stairs to see if it’s gone on it’s merry way tonight before he shuts the chickens up for the night. I don’t wanna hurt it since it’s just had a meal or have chickens attack it after they’re shut in with it.”

By the time she got back to the coop to do something about it, the snake had already left. She told the group it was gone and it wasn’t long after that the story went viral. For those who have chicken coops, you can watch the video below to learn how to keep snakes out of your coop!