By Manly Bryant on September 18, 2019
Advertisement 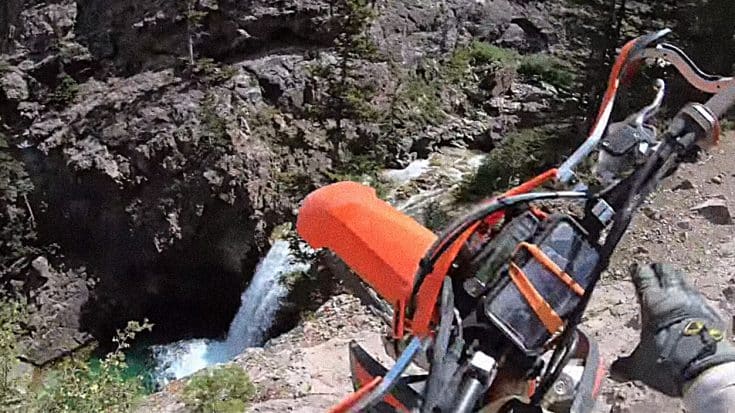 Rick Hogge is a motorcyclist who was spending the day riding the mountain trails of Schofield Pass, near Crested Butte, Colorado when he fell seven stories off a cliff and survived.

According to his Youtube video, Rick was riding with his friend Ryan Edwards and Matt Watson on a highly difficult path that was above his skill level. So difficult in fact that after the fall he said: “a better rider would have had no problem with.”

As he powered up the narrow cliff path he hit a rock that pulled his handlebars left towards the side of the cliff. At the same time, the pull made his wrist twist which accelerated the gas launching him and his bike off the cliff.

With his helmet camera on recording everything, you see Rick attempt to turn around and grab for the plants on the edge of the cliff. “I remember this cedar type bush that I grabbed and felt it slip through my hands,” he later explained.

Falling Into “The Devils Punch Bowl”

Rick fell an incredible 70 feet, where he luckily landed in a pocket of water called “The Devil’s Punch Bowl” that was just large enough to break him from his fall. He sinks deep into the water with the camera still recording everything and later said: “once I surfaced, I thought I was going to drown.”

He climbs out of the water and waits 15 minutes before his friends come to help him get out and also grab his bike. Fortunately, he walked away with zero injuries and a great story to tell.

Watch The Crazy Fall Footage Below