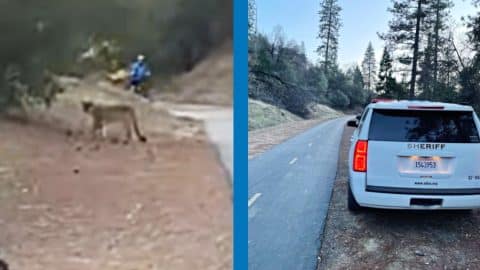 A family was forced to call 911 after being stalked by a mountain lion on an El Dorado trail.

According to The El Dorado County Sheriff’s Office, the family was taking a stroll on a bike trail east of Placerville, California when they encountered the predator. The group, which consisted of a couple, two children, and two small dogs, were warned by bikers about a mountain lion near the path. The family proceeded cautiously, but ultimately, the cougar noticed the group.

After the mountain lion followed the family for about ten minutes, the couple finally reached out for help. The El Dorado County Sheriff Office explained the situation on Facebook. They wrote:

“A deputy arrived and watched as the lion was pacing back and forth on the trail. The Deputy yelled at the lion which started walking toward the deputy instead of running away as a normal healthy mountain lion would. In a last effort to scare the animal away the deputy fired a warning shot into the ground in front of the lion. The lion continued in its path toward the deputy, further showing that it was not well and dangerous to the public. The deputy had no option other than to put down the animal.”

Despite the deputy’s warnings, the mountain lion did not behave in a healthy or usual manner. Unfortunately, law enforcement ultimately decided to put the animal down, and The California Department of Fish and Wildlife was given the cougar to study.

“It is important to note that mountain lions live throughout El Dorado County and should be allowed to live undisturbed,” the sheriff’s office reminded followers in their post.

You can watch the mountain lion’s pursuit in video below.