By Manly Bryant on November 14, 2019
Advertisement 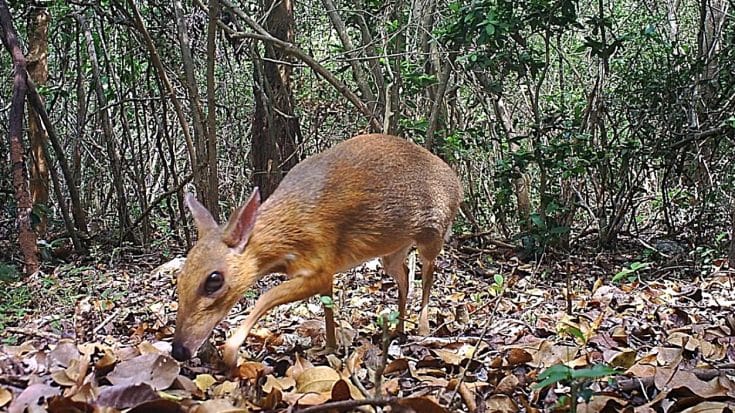 The Mouse Deer Has Been Found

According to The Guardian, scientists found a silver-backed Chevrotain which also goes by the named mouse-deer that was thought to be extinct. They found it when they placed cameras in the Vietnamese woods and captured pictures and videos of it roaming around.

Now that we found the Silver-backed Chevrotain, we don’t want to lose it to extinction. Not only are these mammals silver-backed, but they also need our backing. Click the link in our bio and help us reach our goal of $30K to fund conservation solutions like the field camera technology that helped in their rediscovery. #CampaignforChevrotain . . . . . . . . . . . #MammalRediscovery #Mammal #Mammals #Rediscovery #WildlifeConservation #Wildlife #Conservation

A post shared by Global Wildlife Conservation (@global_wildlife_conservation) on Nov 12, 2019 at 12:59pm PST

“We had no idea what to expect, so I was surprised and overjoyed when we checked the camera traps and saw photographs of a chevrotain with silver flanks,” scientist and expedition team leader at Global Wildlife Conservation (GWC) An Nguyen said.

The animal is no bigger than a rabbit. It’s got mouse in its name but it looks like a tiny deer. However, it is neither a mouse, rabbit nor deer, it’s the world’s smallest ungulate (hoofed mammal).

Scientists were shocked when they recovered footage of the creature because no one has reported seeing one in over 30 years. Everyone figured they went extinct from being hunted out by people and other large predators like pythons, wild dogs and leopards that dominate the area.

A post shared by Global Wildlife Conservation (@global_wildlife_conservation) on Nov 12, 2019 at 10:58am PST

At the time, scientists only had 3 cameras set up in the woods that captured over 275 pictures of it within 5 months. After they realized the mouse-deer still existed the GWC team decided to install 29 more cameras around the same location and doing so they captured 1,881 additional images.

These photographs motivated authorities to take immediate action on protecting the mouse-deer and they have called for the reduction of using snares to capture animals in the local area. Doing this they hope will conserve the species while they study it further.