By Jennifer Pernicano on June 5, 2018
Advertisement 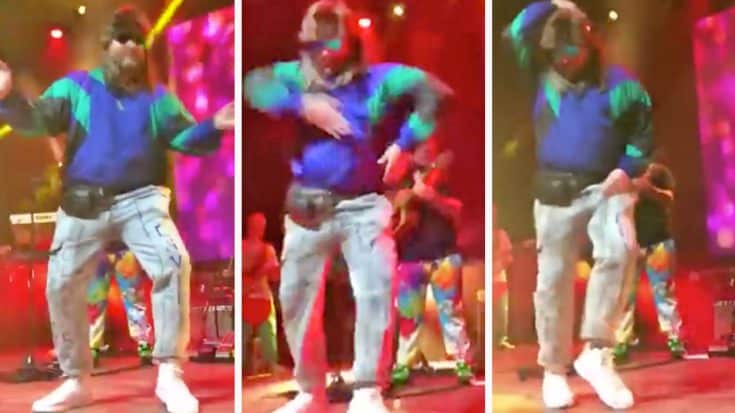 In 2018, Kimberly Williams-Paisley hosted her second annual event called “Dance Party to End Alz” at the Wildhorse Saloon in Nashville, Tennessee. The focus of the event is to raise money and awareness in the fight to end Alzheimer’s disease, which her mother suffered from.

The 2017 event was disco themed and everyone dressed up in their best 70s attire! Take a look at the highlight video from that year’s event.

Along with dancing to fun 70s music, several country stars, including Williams-Paisley’s husband Brad Paisley performed – and 2018’s event was no different. The theme was the 1980s and Paisley, along with Jay Allen, Chase Bryant, Lindsay Ell, and more performed some of their favorite hits from the decade.

Wearing a mullet wig, fanny pack, acid wash jeans, and a windbreaker, country singer Chris Young took to the stage – but not to sing. He busted out some moves that we had no clue he had!

We aren’t sure when or how he learned how to dance like this, but we sure are glad he finally revealed his skills! He was popping and locking and dancing like a robot like we’ve never seen before – at least from a country star!

The event proved to be a huge success, raising tons of money for the organization and from the looks of it, fun was had by all!

Watch the video below to see Young’s epic moves for yourself.

I was hoping someone filmed this ? I’m an idiot #robotforagoodcause