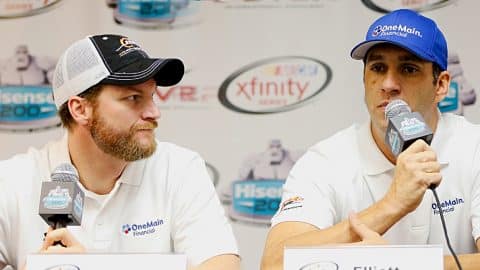 Elliott Sadler has become one of the most visible and talented drivers in both NASCAR’s Monster Energy Cup Series and their Xfinity Series since his first entry in the 1995 Ford Credit 300 at South Boston Speedway – where he was crowned the track champion after winning 13 races (complete with a six-race streak.)

Congrats to @Elliott_Sadler on an amazing full-time career! We can't wait to watch you finish the 2018 season strong. 💪💙 pic.twitter.com/x5j7zyAnJY

Taking to social media and addressing all of his fans, friends, and fellow drivers – Elliott Sadler formally announced his retirement from full-time racing and explained why he chose to do so.

“After much consideration and many conversations with my family, I’ve decided this will be my last season racing full time in NASCAR,” he said in the opening of his letter.

This guy @Elliott_Sadler announced his retirement from full time racing today. He was always willing to help me when I had questions and all around great guy to be around. pic.twitter.com/HkVxlMZSZ0

His reasons for calling it quits are admirable and even though he’s stepping away from the wheel as a full-time career, Sadler says that he’ll be around racing his hardest to finish this season out and surely we’ll find him on the track again in the future.

After much consideration and many conversations with my family, I’ve decided this will be my last season racing full time in NASCAR. (Full Statement: https://t.co/iLQnNG215o) pic.twitter.com/cKEclUt55F

“It’s time for me, as a Dad, to help my kids pursue their dreams,” Sadler explained. “Wyatt is 8 and Austyn is 6 and both of them are very active at school and in extracurricular activities. I want to be with them for all their special moments. I want to be there to hug them when they do well and dust them off and send them back out there when they fall. It’s time for me to be the full-time dad that I want to be.”

I have had the best time of my life coaching my kids through this amazing journey of making it to the State AllStar Tournaments… they have worked so hard.. pic.twitter.com/a3OiKKz1pC

The look on our faces when we saw ⁦@TheJudge44⁩ hit that bomb in ⁦@MLB⁩ #Allstargame2018 .. this was priceless pic.twitter.com/igwyA8GVb4

Sadler came in as runner-up during last year’s Xfinity Series and we are certain he will finish out strong in the 2018 season. He marks a growing trend of drivers who are retiring earlier than tradition has seen in the past. Joining the ranks of Carl Edwards, Dale Jr., and Danica Patrick as drivers who have exited the track in favor of other options.

We wish Sadler the best of luck in his future endeavors and are glad he’s taking extra time to spend with his children!

Listen to Dale Jr. open up about their deep friendship in the video below.

"I just really appreciate him for the person he is."@DaleJr shared his thoughts on @Elliott_Sadler's decision to end his full time @NASCAR_Xfinity career to spend more time with family and "help his kids pursue their dreams." #WednesDale pic.twitter.com/3aB2Rvd7jY